Change My Mind is an internet meme featuring a man sitting in front of a table with large white sign attached to the front of it, the bottom of the sign always says "change my mind" and the top text is changed by the creator. The meme originated from a photo of YouTube vlogger Steven Crowder, very soon after Steven posted his picture to Twitter people changed it into a meme. Fans use the meme to humorously depict characters or controversial opinions in fandom. There are also variants of the meme where the wording is changed to "can't change my mind". There was some backlash over the use of the original image for the meme because some thought that its use indirectly supported Steven Crowder, who is controversial and considered by some to be racist. 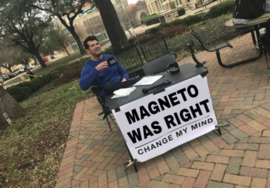 Example of Change My Mind Meme, featuring an argument from X-Men fandom