From Fanlore
(Redirected from Cavalier Chronicles)
Jump to: navigation, search

Samurai Errant is a gen, explicit het, and slash Buckaroo Banzai anthology that was published in Australia. Four issues were published 1988-1990, with a fifth and last issue published in 1996.

From a 1992 ad in Zine Scene: "...pages of controversial LoCs and plenty of glorious illustrations. A must for every Banzai fan...a zine as diverse as the hero himself. Warning — romance is both straight and slash, but there's nothing too offensively squidgy involved." 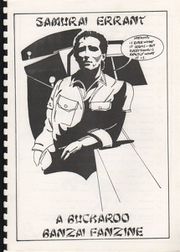 "Find out the whole truth behind the Penny Paradox... and what happens when Buckaroo and Rawhide meet the vampyre Morgan... and when Tommy is thrown out of Cambridge and joins the Foreign Legion..." 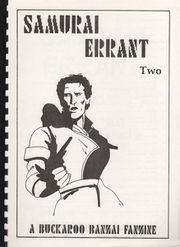 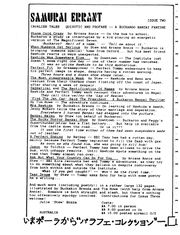 "Find out how Rawhide reacts when Buckaroo brings Peggy home from Oxford... and what problems Tommy has trying to find that perfect pair of shoes... and what happens when Buckaroo and Peggy's car has a flat battery, and they have to seek help from the castle they just passed... " 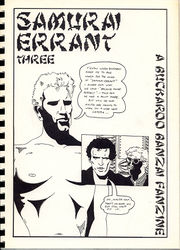 "Find out who Pecos really is, as Reno at last reveals the truth... and how New Jersey copes when faced with the Swedes... and what Tommy has let Pinky in for...and what Homer Hudson's quest is..." 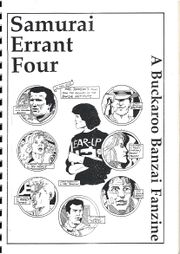 "Find out what happens on the Cavaliers' vacation in Dumpwater, Louisiana...and all about Reno's second wife... and exactly what'Pecos thought of Peggy... and what happens at the bizarre bazaar at Scooter's school..."

It contains 16 pages of "controversial LoCs and glorious illustrations by Tim Howe, Steve Scholz, Shadowcat, Blades, and Arcane Annie. Romance is both straight and slash, but there's nothing too offensively squidgy involved." [1] 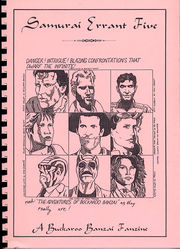