See Captain's Log for other zines with the same title.

Sylvia was also an editor of the Saurian Brandy Digest, Time Lord Tales, and Log of the Starship Enterprise.

Published by a Fan Club

This zine is a club zine, as it mentions "members" and various "officers" (president, vice president, secretary). This club is likely Leonard Nimoy's Enterprise.

Captain's Log 1 was published in October/November 1968 and contains 9 pages.

Captain's Log 3 was published around March/April 1969 and contains 8 pages. 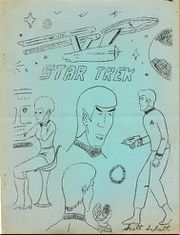 cover of issue #3 cover by Scott Sabath: "A little bit of everything. No, really, it was called Captain’s Log, never mind the lack of those words on the title. And, again, not a big boost to Shatner’s ego, what with Nimoy right there in the middle. The reason it looks like it was drawn by a 12 year-old is ‘cuz it was in fact drawn by a 12 year-old. Pretty good for a 12 year-old, all things considered. And, another tribble cameo." [1]

Dear Members: I'm sorry. Don't hit me. I've been getting the entries for our last contest and I'm a bit surprised! We thought the instructions were so clear! In rules one we asked you to identify the people, right, but the backgrounds are another story. You see we meant for you to identify the background of the photograph not the people! Like the first one could be Lee Harvey Oswald standing in front of the Empire State building. It could? Yeah. Anyroad [?], we got answers like so and so-Ensign and someone or other Captain. We also got a few things like McCoy getting ready to give someone a shot and Sulu hamming it up for the camera. Now, come on gang! Play nice! Those are clear instructions! Clear as mud; So for those who still didn't enter remember these instructions when entering. So far we have only five entries and its such a simple contest. We're moving the closing date up to ???????? So let's get going and all join in the fun. Be sure and enclose the dime and 6 cent stamp when entering, this helps us out. Hope you will all participate. -- Sue Klett VP (What Power!)

Also from the editorial:

I would like to dedicate this issue of The Captain's Log to Mrs. Peggye Vickers and Mrs. Bjo Trimble. These two women have helped us in so many ways to save Star Trek and they deserve this tribute... They were there to help lead us on to victory and have shown us how to work together as one unit. They have proven themselfs not only to us but the stars of the show. We never could have won without them. From the staff of the club and its members, we wish to thank you both for your understanding performance in this time of crisis.