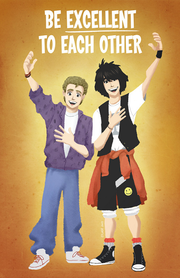 Fanart by Elora, showing them in their iconic pose
Bill & Ted's Excellent Adventure is a 1989 American science fiction comedy buddy film and the first film in the Bill & Ted franchise in which two slackers travel through time to assemble a menagerie of historical figures for their high school history presentation.

The second film Bogus Journey sees Bill and Ted being killed by robot doubles who capture their fiancées, and their attempts to get back from the afterlife by challenging the Grim Reaper to a series of games. The third film, Face the Music, is scheduled for release in August 2020.

The Bill & Ted series is a small fandom that's eligible for the Yuletide fic exchange; 9 stories are part of the collection at AO3.

Due to the main cast being mostly male, slash dominates the fandom, with Bill/Ted the most popular pairing, although there is some het with the canon pairings of Bill/Joanna and Ted/Elizabeth.

Connections with other Fandoms

Due to the telephone booth Bill & Ted use to travel through time, many connect that to the long-running Doctor Who series in which the T.A.R.D.I.S. is stuck as a police box.