Beetlejuice was a Broadway musical by Eddie Perfect, Scott Brown, and Anthony King. It was adapted from the 1988 comedy horror film of the same name by Tim Burton. The musical features a recently deceased couple who tries to hire a bio-exorcist to rid their home of the new family that had moved in.

Unlike the Movie, in which the story is based on the Maitlands need to rid the house of the new residence, this iteration focus is on death and the effects that it has on the characters.

The story begins with the Deetz family attending the funeral of Emily Deetz. Her daughter, Lydia sings about the loss and how it has rendered her invisible to everyone around her. Beetlejuice, breaking the fourth wall as he tends to do through the show, comments that the ballad intro is a "bold departure from the source material". He then informs the audience that this is a show about Death and introduces the next set of characters. The Maitlands, a "boring" and "normal" couple who are about to die.

Upon their death, Beetlejuice tried to ingratiate himself into their afterlives in an attempt to manipulate them into getting a living person to set him free. He attempts to teach them how to scare the new family that moved into the home. The Deetz family, months after Emily's death, are attempting to move on. Lydia refuses to move on and searches for a sign that her mother's spirit is still around. Instead of her mother, she meets the Maitlands after Beetlejuice gives up on them.

Lydia believes the Maitlands can help her and when disappointed by the failed scare tactics, she chooses to punish her family by attempting suicide. Luckily a moping Beetlejuice spots her in time and attempts to convince her to say his name and let him free. Not buying his con, she pushes him off the roof and chooses the Maitlands again, and once again, they failed to scare the family during a dinner party. At this point, Lydia is desperate and summons Beetlejuice. He succeeds in kicking everyone out of the house, keeping Lydia all to himself.

Through the second act and beyond, Lydia and Beetlejuice develop a friendship that leads Beetlejuice to choose Lydia to be the one he wants to set him free indefinitely through marriage. The story continues with Beetlejuice attempting to manipulate the characters into getting his way, Lydia conning Beetlejuice in return to escape, marry and escape him again. All while Lydia discovers that the Neitherworld is not what she thought it was, choosing instead to live her life with her newfound family and letting her dead mom go.

Non-Canon songs made by the cast and crew

This new iteration of the franchise revitalized the fandom and brought in new fans, artists, and writers. As with many fandom resurgences, this brought with it its own set of controversies, ship wars, and fresh modernized content.

Popular fanon is that Beetlejuice is either genderfluid or some other nonbinary gender. Its widespread acceptance may be due to the fact that Alex Brightman, who originated the role of Beetlejuice, has expressed support of the headcanon.[2] Some fans view this opinion as word of God confirmation on its canon status, but other fans believe that actor confirmation is no more than a popular headcanon, due to the nature of theater having many actors for one character.

Another generally accepted fanon is that Beetlejuice's hair will change color based on his mood. Affectionately referred to as "mood ring hair"

* The Deetz and The Maitlands

A popular ship called Beetlelands is an OT3 ship between Beetlejuice and both Maitlands. The other most popular ship is Beetlebabes, the ship of Lydia and Beetlejuice which is primarily a ship in the film and the animated series universe. A beetlebabes shipper is often referred to, most often by antis, as "a beetlebabe" or "multiple beetlebabes."

This ship is considered controversial due to the age difference between teenage Lydia and adult/possibly centuries old Beetlejuice. This has sparked much controversy, including the fact that the winner of the Playbill cover contest[3] ships Beetlebabes, causing many people to say they shouldn't have won or their art be supported.[4]

You’re No Prize Either [2] by Smol_LydiaDate: 2020-06-10Length: 2,354
A mayor’s daughter. A rogue victor. A pining boy. In District 12, 55 years after Lucy Gray Baird’s Games, one Lydia Deetz is reaped into the arena, but she has more to contend with than merely staying alive. A Beetlebabes Hunger Games AU.
Working on it [3] by stinkywormsDate: 2020-06-11Length: 3,784
Lydia isn't sure if she's ready to forgive him, yet.
Say My Name Until it Doesn't Hurt [4] by inthenetherworldDate: 2020-07-02Length: 2,693
AU where Delia and Barbara are in their 20s and complete strangers. Both women just getting out of bad relationships, they randomly meet at a bar at their lowest points. Feelings and things ensue.
In the Spectre's Shadow [5] by LadyStrangeandUnusual (Dream_Wreaver)Fandom: Beetlejuice - Perfect/Brown & KingDate: 2020-09-09–2020-06-15Length: 113107Status: Completed
A retelling of the events before, during, and after the musical.
Till Death Do We Start [6] [Ao3 archive] by BD-ZFandom: Beetlejuice - Perfect/Brown & KingDate: 2019-06-23–2019-08-27Length: 19,816 wordsMedium: FanfictionStatus: CompletedGenre: Friends to Lovers
A series of short stories between Musical Beetlejuice and Lydia Deetz. Following the Musical events, the time has passed, and Beetlejuice returns to wish his living bride a happy birthday, and crash on the couch in the basement. This was an experiment to see how long it would take to establish these two as going from friends to making their vows mean something. 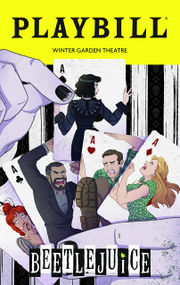 Winner of the Playbill Contest

For the first time ever on Broadway, one guest artist received the chance to see their work on the May cover of the official Beetlejuice Playbill. Out of 850 entries, there were five finalists for public voting and ultimately Angel Q's entry—featuring the characters as a deck of cards—was selected as the winner.

After 850 mind-blowing entries and over 18,000 votes, look who’s holding all the aces! It feels SO GOOD to announce the winner of our Playbill Fan Art Contest, Angel Q! Thank you to EVERYONE who entered and voted.

Unfortunately shortly after this announcement Beetlejuice the Musical would close due to Covid-19 and the playbill was not produced for the show. However, a digital backstage was hosted where the entire cast digitally autographed the playbill with AngelQ's winning fanart. The playbill can be seen on Twitter [Signed Playbill Via Virtual Stage Door]