Beetlejuice: The Animated Series is based on the 1988 film created by Michael McDowell, Larry Wilson, and Warren Skaaren. This was a classic Tim Burton Film and Halloween Time Classic. This series ran from September 9, 1989 – December 6, 1991, with four seasons.

There were 94 episodes with 109 segments.

This project was developed by Tim Burton. Nelvana Limited, The Geffen Film Company, Warner Bros. Television, and Tim Burton Inc. were all involved with the production.

This series is loosely based on the 1988 film of the same name. There were some drastic changes not only to the tone and rating of the show but to the characters as well.

This time Beetlejuice is the star of the show with his living human best friend Lydia Deetz. In this universe, Beetlejuice and Lydia share adventures in both her town of Peaceful Pines (Not Winter River) and the Neitherworld.

It was a successful series airing on ABC’s Sunday Morning Line Up and later moving to Fox’s Weekday Afternoon Lineup. This quirky show was ahead of its time with a strange and unusual female lead and a gross prankster as the hero.

Lydia Deetz is just a middle school girl going to Miss Shannon’s school for girls. She has only two friends, both of whom are outcasts just like Lydia, but her REAL best friend is a centuries-old dead guy with a taste for bugs and all things slimy.

Lydia and Beetlejuice have adventures in both worlds filled with puns and pop culture references that were all the rage in the early ’90s.

In the early days of the fandom, there was a fan page known as [The Neitherworld] created by fandom veteran Sparky. This was the first fansite for the cartoon. Initially, the website was a subdirectory of the creator’s University of Southern California web account in 1997 but in April 1999, the owner purchased the web domain and the fandom found a way to finally connect.

It became the hub for the fans.

Many of the fandom pioneer artists and writers from this website are still active today though many have adopted new pen-names.

However, with a new resurgence of popularity in 2018 and 2019, a flood of purity police and anti-shippers have taken up a loud stance against the older community leaving many of the more silent, strange, and unusual folks in a ship war.

A recent call for an animated Reboot began to rumor after Teen Titans Go introduced Beetlejuice during the episode Ghost with the Most [1]. He was voice by Alex Brightman of Beetlejuice the Musical fame for his time on Broadway.

There are also fanmade Reboots being rumored and in progress, one notably by SuztheSnooze and Boileroo on Tumblr with their blog DeadlyVuTwo

Both Jaques and Ginger share the living spaces of the Roadhouse with Beetlejuice. They have their own rooms which at times look like little apartments.

In a couple of flashback episodes, we see Jaques and Ginger in High School with Beetlejuice, indicating that they were friends for a long time. The two even went to a Prom together.

In the Fandom it has become Fanon that these two characters are together. Regardless of the fact that Ginger is an arachnid and Jacques is a skeleton.

Cinderjuice [3] [Fanfiction.net archive] by Lady NorbertFandom: BeetlejuiceDate: 2016-01-17–2016-02-04Length: 32,348Status: CompletedGenre: Humor/Adventure
Lydia wants to attend her senior high school prom, so Beetlejuice asks the Neitherworld's Fairy Godfather to let him be human again for one night. Shockingly, things don't go according to plan, and the pair land in some serious hot water. It's going to take more than 30 minutes (with commercial breaks) to get out of this one! Part 1 of the Contractually Obligated Chaos series.
Queen of the Sandworms [4] [Fanfiction.net archive] by  Bat13SJx Fandom: BeetlejuiceDate: 2014-10-24–2015-02-12Length: 37,318Status: CompletedGenre: Suspense/Hurt/Comfort
Beetlejuice is taken in to face the judge once again for his horrible pranks and heinous crimes. For his punishment, Lydia is sent to Sandwormland. Beetlejuice gathers up his courage and goes down to Sandwormland to save Lydia. There he finds that she has become one with the Sandworms. Will Beetlejuice be able to save her and get her sanity back? Or is he too late?

A Pair and a Petition [5] [Fanfiction.net archive] by serrah.hawkeFandom: BeetlejuiceDate: 2012-07-06–2012-07-06Length: 9,252Status: CompletedGenre: Romance/Humor
BeetlejuicexLydia. See inside for full blurb. ONE-SHOT. After a petition is presented at court, Beetlejuice is forced to choose between torture-by-bath or death-by-sandworm. Having made the dreaded decision, Lydia is there to help him every step of the way, with things running smoothly until a mishap in the bathroom leads to one thing or another... 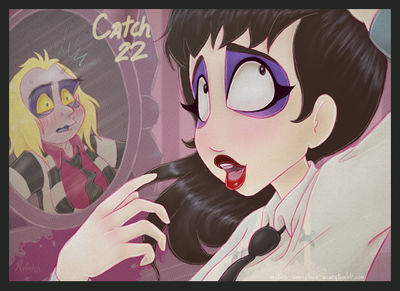 There are over 30 years of fanarts within this community. The animated series fanart was not limited to just the fans but to the animators as well. They participated in competitions of NSFW and gross-out competitions. The art of which is not available to the general public due to Non-Disclosure Agreements however several veteran fans have had access to them through personal contact with the artists.