Beast Touching is a term used by Beauty and the Beast (TV) fans.

It refers to characters having intimate contact with the beast, Vincent Wells. 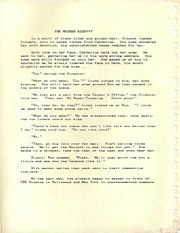 some RPF meta commentary, printed in The Book of Secrets #2 (1988) -- "We just got a call from the Censor's Office," the Director told her. "They say 'No Beast-Touching.' Sorry guys!"

For more, see Vincent: The Beast.

I also would like to see more physical stuff [on the show]. But intimacy is for fantasizing about and for fan fiction. If the producers gave us the intimacy, which may or may not be exactly the way you're pictured it, then the "magic", the anticipation and titillation is gone. Don't get me wrong. I was as unhappy as the next fan that it took them until the nineteenth episode before they finally just held hands, but by "Ozymandias" it seemed the most natural thing in the world for them to do. I'm glad the producers finally put normal touching in the show. It was more abnormal for them not to touch. I was shocked when I read and heard Ron Perlman mention the fact that this hesitancy was due to fears of what the viewers would think about a "normal" human being becoming romantic physically with a "beast". [1]

This "no beast touching" stuff really bugs me. Vincent is NOT an animal, at least no more so than any of us. He is a unique human being possessed of all the nobler aspects of humanity. He is a prince among men. [2]

My primary interest in watching B&B is not in whether they will ever get together. I assume that the producers will never let any "beast-touching" be shown, and that further development of the relationship along those lines will have to be done in my own private universes. [3]

What saddens me is that the beast or human question and subsequent fear of beast touching will stymie even the mildest show of affection. [4]

I think; it would have been perfectly fitting (and perfectly tasteful for all those prudes out there with beast-touching-phobia) if Vincent had been allowed to kiss her on the cheek (he turned his face so beautifully close when he whispered "Be well, Catherine) and if Catherine had followed it up with one of her own on his cheek when she reluctantly withdrew from his embrace nothing could have been more natural and more believable. [5]

If what Ron K hints at is true, that they are going beyond the 'taboos' of 'Beast touching', I can only say do it soon! [6]

Somewhere in my dim brain. I recall last year hearing about "no beast touching", but my little gray cells shut out the idea as being so ridiculous that I did not think anyone would take it seriously.

Then recently, someone mentioned bestiality and same dim brain recoiled in shock. This is what is behind the "no beast touching" idea? Guess I never put 2&2 together before. Now, I wish my brain would shut down — I am so angry, shocked, sad, humiliated, speechless & sputtering, you name it. Also, I am very ashamed of the humans that came up with this idea and took it seriously. What Nazi mentality. The laugh is on me, because evidently CBS does take it seriously, and as long as they do, C and V will get no further in their relationship except backwards, and I am very much afraid that it is exactly what is going to happen next year. [7]

[from a transcript of a September 13, 1989 interview with one of the show's writers, Howard Gordon, conducted by Julie Hamburg at a con (likely a Creation Con) in San Jose, CA]:

JH: The first two years there seemed to be this unwritten rule about no beast-touching. Is there any chance that we will see any more physical romance between them?

HG: Yes, I would say there's much more of a chance to see that this year. (Pause)

JH: And that's as far as you can go with that question, I guess, you can't elaborate!

HG: Let's just say that's That's an issue I can guarantee will be explored. [8]

HOW TO GET MORE OF THE BEAUTY AND THE BEAST - WE WANT TO SEE! The FOX Network has shown interest in buying "Beauty and the Beast" and showing us new episodes! The production office says it is possible. The beauty of the FOX Network picking up the show would mean that the executives of CBS would not be telling the writers what to write, and the censorship (Beast-touching) would not be as stringent!! Can you imagine seeing the "Beauty and the Beast" you've always wanted to see, free of the demands of the Bozos at CBS?? Then write now! Let them know you want to see "Beauty and the Beast" and we trust FOX to "un-do the re-tooling." [9]