Baretta was an American detective television series which ran on ABC from 1975 to 1978. 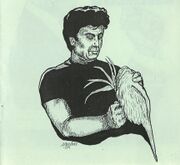 The show was a revised and milder version of a 1973–1974 ABC series, Toma, starring Tony Musante as chameleon-like, real-life New Jersey police officer David Toma. When Musante left the series after a single season, the concept was retooled as Baretta, with Robert Blake in the title role.

Needs Less Canon: This article includes too much canon detail for the amount of fannish content given. Please add fannish context or remove unneeded trivia. Although a brief overview of canon is welcome, the focus of every page should be about the fandom; canon details are important if they can be associated with a particular fannish activity, fanwork, or fannish event. See What Fanlore is not for more information.

Anthony Vincenzo "Tony" Baretta is an unorthodox plainclothes police detective (Badge #609) with the 53rd Precinct in an unnamed, fictional city. He resides in Apartment 2C of the run-down King Edward Hotel with Fred (Frederico) his Triton cockatoo. A master of disguise, Baretta wears many while performing his duties. When not working he usually wears a short-sleeve sweatshirt, casual slacks, a brown suede jacket and a newsboy cap.

Baretta is often seen with an unlit cigarette in his lips or behind his ear. His catchphrases include "Don't do the crime if you can't do the time", "You can take dat to da bank" and "And dat's the name of dat tune." When exasperated, he occasionally speaks in asides to his late father, Louie Baretta. He drives a rusted-out Mist Blue 1966 Chevrolet Impala four-door sport sedan nicknamed "The Blue Ghost" (license plate 532 BEM). He frequents Ross's Billiard Academy and refers to his numerous girlfriends as his "cousins".

Online fandom is scarce, most likely due to the lack of zine content uploaded to the web. However, there were fanworks for the series created the 1970s and 80s, including fanfic (THE JUMPER by Sandra Goodall, published in Rerun #2, 1984), cosplay (as Tony Baretta, mentioned in WARPed MIND v.3 n.24, 1975), fanart (interior art of Baretta and Fred by Sandra Goodall in Pop Stand Express 1, 1985) and even fan clubs for the show, as described in apa zine Tell Me Something I Don't Know! under the title "I Fell in Love With a Striped Tomato" by [T P] (1990):

Tell you how crazy I was over the show [when I was a teenager] — my friends and I formed Baretta & Company and Starsky and Hutch, Inc. We took our nicknames from those and other shows; we had everything from Sweathogs to Baretta's bird, Fred. I was Starsky, and since two people liked Hutch — I was luckier than the real Starsky 'cos I had two partners to look out for me! We dressed like S&H, talked like them, and had more fun than the law allowed.