Antidote is an X-Files story by Karen Rasch and Rachel Howard. 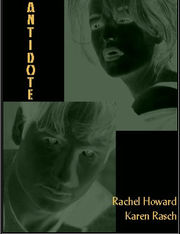 Karen is the artist

This story was first posted to alt.tv.x-files.creative in many chapters.

It is a snowed-in-at-the-cabin classic story which takes place in Colorado.

It was the winner of multiple 1998 Spooky Awards:

"Strange doings in a tiny western town bring Mulder and Scully out to investigate. Once there, they uncover a deadly experiment that may cost both of them their lives."

From the Author Notes

"Welcome to our little experiment. Neither of us had ever collaborated on a story before, but, hey, first time for everything. We played fast and loose with the description of Gateway, which is a real place that I've actually been to. But it's all in a good cause - the further glory of fanfic. So please forgive me, and if you're planning on visiting western Colorado - buy a good map."

Rachel has also teamed with one of my favorite authors Karen Rasch on "Antidote" in which Scully gets to wear one of those fetching biohazard suits and share a cabin with that other guy.[1]

Have you read "Antidote" by Karen Rasch and Rachel Howard? It's fantastic! It has a viral outbreak, action and MSR for good measure. It's one of my favorites - I highly recommend it.[2]

This humdinger of a cliffhanger fic has great writing (well, *duh*), angst, plot, romance and one nasty wittle bug. And it's HUGE; a great summer read. You go girls! You did good. - 5+ Flashlights [3]

I think "Antidote" by Rach Howard and Karen Rasch is always worth reading. It doesn't have literary pretensions, but it really feels like "XF the TV show" as opposed to "part of the XFic canon." I think that's almost gone in the modern fandom.[4]

There isn't much that this story doesn't have going for it: high adventure, surprising twists, dastardly deeds, and tantalizing romance. It has all that plus marvelous writing. You cannot lose with this one! [5]

Another plotty x-file (sensing a pattern here!) with some great sex to go with. I do have some problems with a few aspects of this story, but it's atmospheric and overall excellent.[6]

Today’s rec kicks it old school. As in, just barely written during Season Four during the original run of the series old school. As in, won a ton of 1998 Spooky Awards old school. And darn it, how cool is it that our fandom has been around long enough to be writing stuff almost 25 years old?! PLUS, Rachel Howard and Karen Rasch were THE BEE’S KNEES back in the day. Seriously.

So when they teamed up to write a casefile that took them almost a full year to complete, you know it had to be good. And hot. And damn near perfect.

It wrote the book on some of our favorite tropes. Cabin in the woods? Single bed? Injured!Scully and protective!Mulder? FIRST TIME SEX?! Guys, if we give any more about the fic away, we’ll ruin it. But needless to say, it’s a Pine Bluff Variant-type illness that wipes out an entire small town in a remote part of Colorado, and Mulder and Scully just HAVE to go out to investigate, and chaos ensues. Enjoy, loves! [7]