Alistair/Morrigan is the pairing of Alistair and Morrigan from Dragon Age.

Their character interactions in Dragon Age: Origins mostly consist of antagonistic needling and banter. If the player makes the appropriate choices, the two of them may perform the Dark Ritual that results in them having a child, Kieran. Their paths separate after the game but they may meet again in Dragon Age: Inquisition for a brief encounter where their personalities and pairing dynamic seem to have mellowed out.

The pairing is considered rare but it has a small, organized following. As of 2021, it features in 150 fics on AO3, although it often shows up as a side pairing. 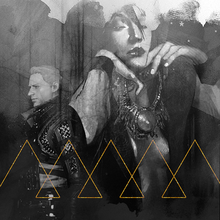