12 Rites of Passage is an X-Files story by Anne Haynes. 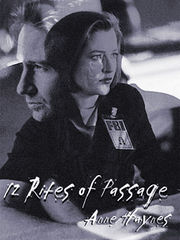 It was the winner of six 1996 Spooky Awards.

This story is a prequel to 12 Degrees of Separation.

"12 Rites of Passage" is a very well written story. The author knows how to capture her audience's attention and how to build a desire to read on. Yet, the story seems too long in one or the other part. Even though the reader realizes some of the rather long episodes are required for the altogether understanding, it is at those times you wish there was another way to describe things. Additionally to that the most important storyline, finding Samantha Mulder, is the part which is most predictable and it is not before long that the reader knows where to find her. Only to realize that he is now in another chase and run episode. Unfortunately, these episodes end as expected, yet are not long enough to steer up emotions of fear or agony. Neither in the reader nor in the characters themselves.

Maybe I am just well too aware of the typical storylines itself that I am capable of realizing rather fast as to what is going on, yet even I was not able to see the real outcome of it. Always a good sign as I see it. However, it would be adviceable to reconsider if all the scenes have to be as long as they are and if there is no other possibility as to how to describe the feelings of the charactes and their development. Is the growing relationship between the two major characters really the focus of the story or is it something else? I for one rule for the something else part and have the relationship between Mulder and Scully grow, deteriorate or stay as it is, only as a byproduct of the things happening around them.

The supporting characters which did not appear "on screen" actually were the best ones. The second meaning in their names and their description are wonderful and brought forward one or the other laugh. Unfortunately, supporting characters are not the ones who carry the whole story, but are only a part of it.

Even though this story is not the best I have ever read, I would still recomend it to the dedicated, since it is certainly in the top ranks of the stories I have read. And read I have many.[1]

12 Rites of Passage and 12 Degrees of Separation by Anne Hayes were what really inspired me to write and get more into fanfic. Just incredible...[2]

In my mind [12 Rites of Passage and 12 Degrees of Separation] are one and the same because I read both parts in order together and you can't have one without the other.[3]

All of the characters, and many of the minor cast is in this story, are achingly true. The story is only available through the wayback machine, so grab it if this is to your taste. Long, and the prequel to 12 Degrees of Separation, separate post. M/S reach a point in their relationship where they realize that there's something more to their relationship than the case. The case, however, is the disappearance of a woman that Scully has befriended via the Internet. Adventure, casefile, romance, angst, conspiracy it's all here, except for the satisfying conclusion.[4]

Do you guys have one of those stories that just represents everything that fanfiction is to you? Maybe it’s that smut biscuit that is so deliciously written, or that casefile that reads like the latest thriller that Barnes and Noble just released. Or perhaps it’s that novel length introspection piece that weaves through the inner workings of Mulder and Scully’s minds as they finagle their way through their relationship.

For us, these are it, and the wonderful author managed to snag us hook, line, and sinker within the first few sentences. Today’s double feature has won multiple Spooky Awards, and rightfully so as they’re utter perfection, stories you can read over and over again. Our beloved duo are written expertly in this character driven novel as they struggle to embark on a new journey, foraying from platonic to romantic.

It was brought to our attention that the author, Anne Haynes, has recently passed away. We here at TXF Fic Chicks are forever grateful for the stories she’s crafted for our fandom, and for blessing us with her epic tales of Mulder and Scully. May she rest in peace as her beautiful words live forever in our fandom, etched eternally into our hearts. xoxo [5]