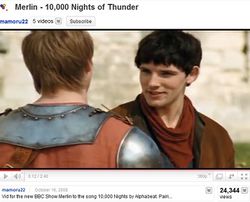 10,000 Nights of Thunder is a Merlin/Arthur vid by mamoru22 (2:39 min). It was one of the first Merlin slash vids and widely linked as a recruiter vid for the fandom and the show. The vid was made and posted between episode four and five, using only clips from the first four episodes, and it was a 2008 Camelot Music Video Awards nominee in the category 'Pairing: Merlin/Arthur'.