Zoo Tycoon is a game series consisting of three major titles, not including expansion packs: Zoo Tycoon, Zoo Tycoon 2, and Zoo Tycoon for the Xbox One.

Gameplay consisted of building zoos and keeping both animals and guests happy. Zoo Tycoon 1 came out in 2001 and was a flat, pixelated game for the PC. It had two expansion packs, Dinosaur Digs and Marine Mania. Zoo Tycoon 2 was released in 2004, and was a three-dimensional game for the PC, jumping ahead graphics wise in just three years from the first game. It had five expansion packs: Endangered Animals, African Adventure, Marine Mania, and Extinct Animals. It also had two collections that contained multiple of these expansions: The Zookeeper Collection and the Ultimate Collection. One DLC was made, called the Dino Danger Pack. Finally, in 2013 a third installment was made for the Xbox One and Xbox 360. This third game was not well received by the fandom, as it took away much of the sandbox gameplay in favor of pre-made click-and-place exhibits.

Despite having very little canon content to go on outside of building zoos, Zoo Tycoon had a decently sized fandom during its heyday. Fandom mostly congregated in fan forums, first created with InvisionFree, then later with other forum hosting sites after InvisionFree was merged into Tapatalks.[1]

These forums were the best and only places to find mods to download into one's Zoo Tycoon 2 or Zoo Tycoon 1 games. The creation of mod packs that added such things as extinct mammals, monsters, or even just items, were the main goal of these forums outside of community. Mods that 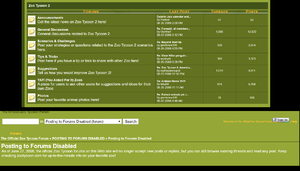 Screenshots of the official forums from the Wayback Machine

removed the grid placement and added no-clipping to objects were also created and became a staple for any users who enjoyed frequently playing the game or creating content for the fandom.

There were also mods that improved the graphics and textures of the animals and biomes.

Outside of the numerous fan made websites, there was once an official Microsoft website as well.[2] This was a child-friendly forum that adhered to the actual demographic of the game, compared to the older demographic of fan sites. At a time this official forum was well populated, and was one of the main ways users could find links to other Zoo Tycoon fan sites. Ironically, the children who came from the official forums into fan forums were often driven away, specifically from Zoo Tycoon Volcano. The official Microsoft forum has since been removed, and it's link only takes one to a "page not found" page on the Microsoft website.

The Zoo Tycoon fandom participated in a number of fun community projects, mostly the creation of mods. However, there were also plenty of photo contests, YAFIs (you ask for its), and exhibit creation videos.

A phenomenon also specific to the ZT2 fandom, especially in the early days, was the creation of story driven videos recorded within the game itself (machinima). These videos would usually make use of mods or mod packs and more often than not had a theme of horror or sci-fi. Voice actors were not normally used, likely due to lack of recording equipment/software in the early 2000s for the kids and teens who produced them. Instead, the artist would simply put text on the screen. If the Machinima was made in Windows Movie Maker, one could tell by the default font used, and also if there were any intro and outro screens, which would typically have a default blue color. YouTube had once had a video length limit. This may have been what contributed to the short length of these Machinimas, and how they would be split into several parts.

An especially popular YouTuber who produced this kind of content was Stalker2K7, who went on to create his own games and game assets after he moved away from Zoo Tycoon many years later. On Oct 2, 2020, Stalker2K7 made a commentary video looking back on his old Zoo Tycoon videos. He credited Zoo Tycoon for being what pushed him to go to college for video games and later land a job with a major video game company. Specifically, he points to a custom skin he made for a hippo model as being the starting point to it all. Then, the mod that inspired him to make his popular Machinima series, was his re-skinned zookeeper designed to be bigfoot. He said that, at the time in the fandom, several modders had been trying to make a bigfoot mod, but had been having trouble. He had wanted to "show off" that he had actually created a bipedal bigfoot.[3]

Memes and Other Inside Jokes