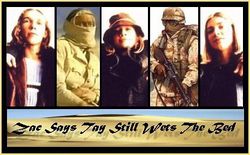 Zac Says Tay Still Wets The Bed is a Hanson fanfic written by Nick. In the story, Hanson are on a plane which is hijacked by Serbian terrorists who redirect the plane to an underground complex in Algeria and keep the passengers hostage. The boys concoct several escape plans, many of which fail, before they are finally able to escape and the world discovers that the plane's passengers are not dead as they've been lead to believe.

The series takes its title from an infamous quote from Zac (although one website attributes the quote to Isaac[1]) that many fans interpreted in... interesting ways.

There are two sequels.

I Ain't No Angel

After surviving the plane hijacking, Hanson decide to go on vacation in Germany, where Zac meets a strange character named Hugo. He soon learns that Hugo is a teenage runaway. Some time later, the boys (and Hugo) are kidnapped by the captain who helped them escape from the hostage camp, who explains that they are being taken to the village near Kosovo where the man behind their kidnapping (known as The Commandant) is hiding in hopes that they can identify him when he is captured. Things do not go according to plan.

The chapter titles are taken from Midsummer Night's Dream, suggesting that Hugo is meant to be seen as akin to Puck.

After the mission in Kosovo, the boys return to Oklahoma. Prologues by Nick and Zac D tell of their plans to have Hugo come visit, at which time they discover more about his family. With his sister also visiting, they realize there has been a bigger government conspiracy behind their kidnapping than they believed before, and the five of them go into hiding while they attempt to figure out why their continued existence is a problem and to which government.

This story was never finished. Nick's explanation reads in part:

This sprawling chapter is the last you're going to see of My Little Blond Friend. As of the moment you reach the end of the last sentence posted here today, the story will cease. This chapter, I can tell you right now, doesn't tie anything up. Indeed if anything it probably leaves you wondering even more. I'm sorry to leave you like this, but stop writing this story I must and if you'd care to read my humble note, I'll try to explain why. My story has become more of a chore, more of a deadline to reach, more of a responsibility than it is a pleasure. I've always written fanfiction because I enjoyed it so much. I can't do it without that feeling and in the last several months it has become more and more noticable to me that the feeling is going. So I'm calling a halt right now before I hate the story, before I curse the day I ever start writing it.[2]

When I was younger, I knew the basic plot of this story and shied away from it. I had a low tolerance for nailbiters and angst, and Zac Says Tay… definitely falls into the former category. I’m glad a finally gave it a chance, though. What makes it, and so many gen stories, work is the relationship between the three brothers. That’s something anyone, whether they typically read het, slash, cest or nothing at all can appreciate and enjoy.[3]

I’m a really big fan of historical fiction, so I enjoyed the nods to World War Two in the story. I do wish the loose ends were dealt with, but I don’t have high hopes that the mysterious Nazi relative thing will be resolved in the unfinished third story. As for the Cold War and more recent war references, I’m not as well educated on those events, sad to say. But I think that the modern warfare mixed well with the references to history. It seemed to bring it all into a better context to me. The mentions of punk rock don’t go amiss, either.[4]

Chapter twenty five marks the end of “Act I” of My Little Blond Friend. I already anticipated being disappointed by the lack of an ending, and knowing that Nick wrote so little of Act II only deepens that disappointment. Not surprisingly, none of the mysteries (which all turn out to be related) are resolved by the last chapter. What Hugo’s past has to do with the hostage situation and the fake charges against the boys, I still don’t know. And what about that Nazi relative? That plotline was dropped completely after the second story, but I can’t help imagining it would have turned up again, had My Little Blond Friend been finished.[5]

That said, it's still a GREAT title (very Douglas Adams)! Titles are obviously a strength for Nick. His biggest strength as a writer, though, is dialogue. His is the best in Hanfic; particularly the easy give-and-take between the brothers. It rings true and, whether it's accurate or not, it's the way we want to believe they interact. Nick is able to allow the boys (uh, excuse me, young men) to express strong emotion and display a strong sense of unity without being corny or melodramatic and folks, that ain't easy. It's the humor in the dialogue which makes the reader willing to cheerfully suspend disbelief when plot developments get a bit too convenient. And they do. Unless, of course, all stewardesses are ex-army nurses who just happen to speak Yugoslav. And I don't think maps of air conditioning vents are considered trendy office decor, even among the terrorist set. A guy could lose his poetic license for things like that (*grin*).[6]

Not only is it the greatest title for a story, but it’s simply one of the most imaginative and well thought out stories out there. Nick wrote a wonderfully insightful (and eerily prophetic) tale of three brothers hijacked to somewhere scary and violent. This one was just cliffhanger after cliffhanger, all coming together to form a story of love and bravery and humor and all the other things that make us human. Read it—if you’re here, you should have done it already.[7]

This story is the first in the action adventures of Hanson being reluctant heroes written brillantly by Nick! It is filled with drama, laughter, tears and hope! This story makes you sit on the end of your seat as the Hanson's are taken hostage by Serbian terrorists on a flight home. This is a must read for all Hanson fans![8]

Read Zac Says Tay Still Wets The Bed. It is awesomeness personified, despite its weird title. If you read hanfic, you should know what this fic is. It’s practically a prerequisite. :)[9]

Who hasn't been informed by eager friends about the drama and tears of Walls (by Sheryl and Laurie), the hilarity of For What It's Worth (by Kristen) or the realistic, but still heart-warming action of Zac Says Tay Still Wets The Bed (by Nick)?[11]

Its a classic. The best non-Romantic (and to be truthful, one of the few) HanFic.. Its a bit freaky now, considering whats going on in the US. Very much so Recommended.[12]