Winter is a slash Starsky and Hutch story by Lynna Bright. 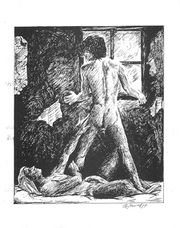 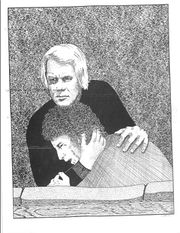 Wow! Lynna, did you have to destroy the world as we know it just to get the two of them tighter? Ouch! This is painful and beautiful. The important thing as always is that they are together. Carol's and Jean's artwork complement the pain and beauty, especially the last illo which is full of hope. [1]

I think what I am trying to say here is that too much S/H concerns itself with the 'gazing at each other'. What I particularly liked about Lynna Bright's WINTER (in the last CODE SEVEN) was that her heros were 'looking outward'. I might not have agreed with her reading of their characters and decisions, but at least they weren't solely wrapped up in each other, to the exclusion of all else.[2]

Again she sets up a sweeping premise, then fails to develop it -- this time it's a story about the end of the world, nuclear holocaust. S&H are forced together in a sort of "last man on earth" scenario -- and yet the sex and romance part is beautiful enough to make me not care about the other problems. [3]

Starsky & Hutch is a classic fandom with decades of zine fic that is now being slowly (and wonderfully!) posted to the net, thanks to the tireless efforts of some of the fandom's dedicated fans. This is such a story. It is brand new to the net as of last week although it was written in 1987. It is a dramatic story dealing with a post apocalyptic world after a nuclear holocaust and how Starsky and Hutch cope with a destroyed world and with destroyed lives. I found the story compelling and the story telling well done. I was drawn into the devastated world that this author created and her characters are well crafted. I highly recommend it.[4]

I loved this! It would be so great to have a sequel...what happens to our guys and to their little son? Could Huggy possibly be alive? or Dobey? This not only was kind of scary, but so tender and sweet.[5]

I don't normally go for these kind of stories (didn't care for 'Decorated for Death'), but there was something sad, vulnerable, and gripping about this story. I applaud Lynna for going there, esp during the time frame she wrote it, and now with all the 2012 "doomsday" talk. Howevre, I DO wish it had ended differently. Unless I'm missing part, it seemed to end with them leaving LA. It just seemed to abruptly end. If any story cries out for a sequel or continuation, to me this would be it. (Well, not counting Ro's vampire story,[6] but that bird ain't going anywhere.) [7]

When I was in the first blush of discovering the amazing world of Starsky & Hutch in 1996, the zine most responsible for drawing me into the greatest love story ever told on TV was Code 7 # 4 (still in print). It had an amazing variety of stories and hand-drawn art. Compiled before computers, the story had to be typed numerous times on large sheets of paper and then reduced by the printers. It's an amazing work, a true labor of love, and everyone involved in its production had a right to be proud of it.

Of all the wonderful stories in that zine, one of the most compelling was Lynna Bright's "Winter." It was the first story of hers I ever read, and it amazed me. The storyline was compelling and the time period -- before computers were commonplace, before the internet, before we knew much about AIDS, or thought it was only a "gay disease," a time when many of us feared nuclear annihilation was imminent -- was still fresh in my memory. To find the two characters I loved trapped in the bleak and forbidding world of nuclear winter was heartbreaking. And yet, the beauty of their blossoming feelings and their intense dependency on each other's strength and character dragged you into the story and kept you turning pages. The editor of the story called it compelling, and I found it to be that way. It's not a perfect story, but it doesn't have to be. The powerful love of S&H for each other, their sense of duty, their resourcefulness, all of it is there in every line. Coupled with Lynna's lyrical turn of phrase, the story drew me in from the first words and wouldn't let me go. While reading this story, I could envision every scene, and felt I was there in them, lost in story, living it as it happened.

It is a surprisingly hopeful story in spite of the grim world view. I love this story and this writer. Lynna was one of the most beloved writers of the 80's, and rightfully so. She was one of the authors that made me aspire to create S&H fiction of my own.[8]