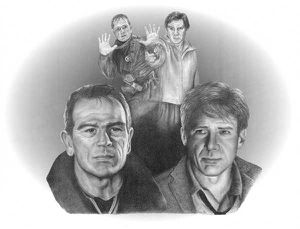 The cover is by Caren Parnes.

Artwork has been uploaded to Fanlore with the artist's and publisher's permission.

Summary from the publisher, "Richard Kimble begins to pick up the pieces of his shattered life, to recover from the devastation of his wife's murder, to re‑establish his career. Unexpected favors from Deputy Marshal Gerard help ease his way back into civilian life, yet he remains deeply conflicted in his feelings about the man who had been his nemesis. But as time goes by and healing begins, other feelings begin to intrude."