Who Dares Wins is a slash novel by Sharon F. It was edited by Darien Duck, Carol Hunterton, Linda Neel, and Sarah Leibold.

It is a same-actor crossover with characters drawn from several movies that also featured the actor Lewis Collins (who played "Bodie") and Martin Shaw (who played "Ray Doyle") in the Professionals.

from the zine: the character line-up

Doyle and his--non-related as far as they can figure--look-alike Nilolai Rozhkov (a character from the movie "Intrigue"), his brother Sean Doyle who has used the alias Don DeMarco (from the movie "Ladder of Swords") and his cousin James Griffin (from the movie "Cassidy") 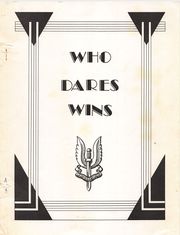 xerox copy of the cover

From the zine: Because these characters are drawn from so many films and shows, I have employed literary license and abrogated the time period the character may belong to so that they may all belong to one, happy moment in time.

The story revolves around a broken Robin Wesley coming to his cousins for help in capturing Rozhkov, who it turns out he is in love with. Doyle goes along for the ride.

Well, this one was certainly *memorable*. The premise is rather extreme. Basically, the author took every character Lewis Collins and Martin Shaw had ever played (including the actors themselves!) and wrote them into one big Bodie/Doyle-CI5-Universe story, where various Doyle and Bodie look-alikes are running around, many of them family, but some not. An amazing premise, but since I'm not familiar with the acting work of Collins and Shaw, and have seen little of the actual series 'The Professionals', it didn't mean a great deal to me. I suspect it would mean more if I'd seen all of these movies/TV shows the novel referred to. A shame, since I think a die-hard PROS fan would love this novel. [1]

I was sold by the time I hit page 2, which is a color xerox listing the players in the novel and including color pictures so that you can keep them straight--Peter Skellen is Bodie's brother, Lewis Collins is a character, Gavin (from Cuckoo's waltz) is a character...in fact Bodie and Doyle had 4 alter-egos a piece. But the novel is not a farce, (mind you, I haven't finished it yet, but it dodn't start like one) each of these characters has some logical reason for their connection to Bodie and Doyle, who are clearly the major characters of the zine. [2]