We Die Like Fen was the first flash exchange that went by that term. It was run by Morne for members of Exchanges After Dark and anyone who stumbled across it from the larger exchange fandom, as well as being advertised and discussed on the Heliocentric Discord server. The first round had 60 participants and produced 127 fanworks; the second round had 96 sign ups[1] and 325 fanworks; the third round had 38 sign ups, then an additional 43 sign ups in the second collection (some of them repeats), and produced 217 works.[2]

AO3 Support had to be added to the collections of the first two rounds because Morne accidentally revealed a serious bug in Archive of Our Own's challenge system that exposed user's emails to each other.

The first round of We Die Like Fen started a trend of flash exchanges, including but not limited to Iron Triangle, Writing Rainbow, Mpreg Flash Exchange and 300bpm, many of which tried different formats and rules.

Participants had three days to sign up and write 1,000 words or make a piece of noodle art. The exchange was "intended as a community writing challenge. It is supposed to be fun and sort of stupid, but it's not a bad fic exchange. Do your best to help the challenge succeed!"[3]

WDLF was run out of the Exchanges After Dark Discord server in its own channel, but discussion spilled over to the multifandom anon meme fail_fandomanon and the Dreaming of Sunshine Discord server Heliocentric.

The first round exchange had no pinch hits, no tag set or nominations, and no optional details. Participants signed up with fandom tags and freeform tags only, pulling from the canonical AO3 tags only because of the lack of tagset, leading to creative use of freeforms. Instead of the mod sending out emails to ask unmatchable participants to add offers, participants with unmatchable signups had their signups deleted. The FAQ notes that there was "a non-zero chance that this exchange will completely fail, and no one will even get assignments" because the deletion of unmatchable signups might cause "a cascading failure that knocks out more than just one participant. Actually, it probably will. This isn't an issue, and it's not something that will be or needs to be fixed."[3] There were 64 sign ups when matching started.

People who fail to complete their assignments will be have their AO3 name shared, along with the name of the person who they defaulted on (because this exchange has a name and shame clause)[3]

Most requests can be browsed here.

Round 2: Death Waits For No Fen / Vice and Fen / F is for Fen Who Do Stuff Together

Announcement as posted by Morne.

The second round's date, theme, tagset set up, minimum word count, and special recipient were decided by a randomized generator that used a google form linked to a spreadsheet. The version that was generated for Morne at the end of the day on July 31, 2019 (which can be seen to the right) decided the specifics of the exchange, which in this case was teachery, with a tagset for freeforms and a minimum of 1000 words. Participants were forbidden from discussing the specifics for most of the first half of August.

shadowsapiens took over the collection and held it for ransom. Fics would be revealed either at the originally planned time or once 50 fics had been tagged with catboys, corsets, or coffee, whichever came first. The tag requirement was met a couple hours after the original reveal time.

Morne did not promise that there would be an anon period. Therefore, fencesit created Morne Did Not Authorize This Anon Collection. Works in this anon collection remained anon (but not unrevealed) up until two days after fic reveals. 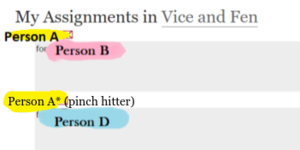 In the above screencap, the user looking at their assignment page would see:

To the right, there would be two buttons: "Fulfill" and "Default". The "Fulfill" button brings the user to the exchange collection's Post To Collection page, ticks the "Fulfil assignment" box for them, and fills their recip's username in the "gift this would to" field. The default button removes the assignment from the user's account and alerts the exchange mod that the assignment will not be completed. 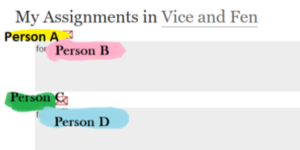 In the above screencap, the user looking at their assignment page would see:

Round 3: What Fen Do (When they're Stuck Indoors) / When Death Loves Flamingos

Round 4: We Lived to Die Afen

Although Morne had again said she would never run another round of WDLF, Round 4 took place from September 4th, 2020 to September 8th, 2020. At least 51 participants created over 84 works in 60+ fandoms.[4][5] Requests were allowed one fandom, 1-20 freeforms, and a title; matching was on one fandom and one freeform.

The exchange had two collections: a main collection for normal gifts, and a secondary collection meant for pinch hitters and treats.

At this point Morne seemingly gave up on swearing to never again run another WDLF. Round 5 took place from June 1st, 2021, to August 21st, 2021. Approximately 101 participants created 634 works in 252 fandoms.[6] (Exact participant numbers cannot be verified, since some participants joined or left the exchange between rounds.)

Round 5 was split into four week-long rounds with varying matching and minimums. After each round, a new option for matching criteria was added, and participants could alter or delete their signups as they wished before the next round began. Failing to provide data for a matching criteria would be treated as creator's choice for the relevant field.

Round 5 introduced a commenting challenge event at the end of the exchange, dubbed Feedback or Yeetback, in which creators who received no recipient comments would be allowed to ungift their works. The challenge included a goal of at least 3 comments on every work posted to the exchange.

Round 6: We're Punished Like Failures: We Deserve Less Fun

This round was run as a 'punishment' by Morne for failing to achieve a minimum of 3 comments per work in Round 5's Feedback or Yeetback commenting event. It was a double-blind exchange, in which all requests were anonymized under alternate pseudonyms in an Airtable database.

Matching was based on themed 'teams' formed in the exchange Discord, which were given all assignments for the relevant team and let individuals choose which assignments to fulfill. Assignments could be given multiple times to different teams, and no rule prevented a participant from requesting the same team(s) they were added to. Other matching fields included fandom, relationship category, and freeforms.

Round 6's creators were spread across 35 teams, each with an associated role and locked channel in the Discord server. Teams were created by a period of brainstorming and voting at the beginning of the exchange, and creators were matched purely by what team(s) they were willing to be placed in. Members of a team would receive collective access to an Airtable of the team's assignments, and informally claim assignments to fulfill. Fulfilling a pinch hit for a particular team would grant also membership in that team (and access to its assignments) if the creator wasn't a member previously.

While the moderators had a spreadsheet of deanonymized requests, works posted to the collection had no recipient attached, and participants were encouraged to guess, claim, and "lick" works they believed had been written for them, which would be gifted to any possible recipients at the creator's discretion. Recipients were not revealed until the end of the anonymous period.

Round 7 revolved around creating tailored assignments for individual recipients. Matching used the freeforms "guess", "find me", "my works", and "My Bookmarks" as options for how to determine a recipient's preferences. [9]