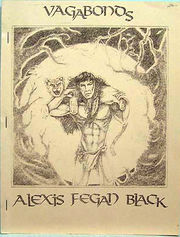 Vagabonds is a K/S slash Star Trek: TOS novel by Alexis Fegan Black. It was published by Pon Farr Press in 1990 and has 120 pages. Marilyn Cole is the cover artist.

It was reprinted in 5 of Hearts: The Collected Short Novels of Alexis Fegan Black.

Publisher's summary: "After a routine landing party turns to disaster and Dusk Blackcrow – a young science department officer under Spock’s charge – is killed, the Vulcan has his eyes opened to many new realizations. Nothing is permanent. No place is home. Death is the only absolute."

From The LOC Connection #25: "While on landing party duty, a young science dept. woman is killed. The affect on Spock is profound, and as a result, he leaves the Enterprise to live with a tribe of Native American Indians on Earth. Kirk discovers that running the ship without Spock isn't how he wants to spend the rest of his life, and their struggle to be together weaves a romantic, tender and often poignant love story."

From Media Monitor: "A K/S novel by Alexis Fegan Black! Cover by Marilyn Cole! A thought-provoking study of the effects of death on Kirk and Spock. When a young science-department lieutenant is killed on a landing party. Spock's reaction is anything but predictable. He suddenly becomes a long period of time. It is there that he must confront his own mortality - and the fact that nothing is permanent."

“Jim,” Spock said fervently, “you must understand that the events which transpired on Sirius VII did touch me – perhaps more than anything else ever has. And I know now that life without feeling is no different than life lived in constant pain. The absence of color is blackness. The absence of feeling is no different. Vulcan is wrong. A thousand years ago, perhaps it was necessary to let go of feeling in order for my world to survive. But now,” he insisted, “now it is wrong. Certainly it is wrong for me – for as you have pointed out, I am no longer Vulcan. Home does not exist for me any longer, Jim. Don’t you see? When I came here, when I gave up my father’s house and came aboard the ENTERPRISE, I renounced through my actions all things Vulcan. Is it so strange that I now renounce the emptiness which so many years of living as a Vulcan has created?” Kirk blinked, dizzy and confused and utterly terrified. “You scare me, Spock,” he said before he realized what words were going to come from his lips…

As most of you know, I am not a supporter of people who xerox zines. Zine pirates are thieves and quite simply, the time has come for editors to at least try to make the xeroxer's life more difficult. Over the past few years, all the K/S editors I know have had to dramatically decrease their print run. In most cases, print runs have been cut in half, and the day is coming (sooner than we think) when it will no longer be financially feasible to do zines at all. Granted, part of the "problem" is that the interest in K/S is no longer as high as it once was. But for those fans who do still enjoy the genre, myself included, it would be tragic to lose all K/S zines due to the unethical actions of a few unprincipled fans. For that reason, VAGABONDS has been-printed on a paper which will make xeroxing difficult if not impossible.

Unfortunately, the down side to this is two fold. First, it makes the zine slightly more difficult to read for those with vision problems. But it is at least readable which, hopefully, it will not be in xeroxed form. The second problem you already know: fewer pages for the same amount of money. To those who aren't aware of printing nightmares, suffice it to say that a case of white, 20 lb. bond paper is approximately one third of the cost of the paper you are now holding in your hand. Alas, no one has yet come up with an economical way of manufacturing cheaper, dark-colored paper. My apologies for both inconveniences, however, I see no alternative but to continue producing all new Pon Farr Press zines on dark paper to cut down on the amount of xeroxing going on.

Now this is where you can help. Since zine pirates are now directly affecting you, please help zine editors to put them out or business. If you know someone who is a zine pirate, let the editor know. If you know someone who xeroxes copies of zines for friends, please stop supporting them. Granted, it's cheaper for you to get your zine from your best friend who has access to free xeroxing at work - but when enough people are doing this, it is destroying the editor's ability to produce zines, and to produce them at a reasonable price. If only ten fans out there are each copying ten copies of a zine for their friends, it adds up to one hundred copies overall - and that's what's destroying zines as much as the professional zine pirate you see sitting behind her table at conventions with her smarmy little smile, telling you she's doing a service for fandom. As Spock says later on in this book, "Buzzardshit." The only person the zine pirate is doing a service for is herself and her bank account. We know of one California-based zine pirate who makes her living attending conventions and selling pirated zines. She's never written a story, never edited a zine, never drawn a piece of artwork in her life. She ain't no service to fandom, so don't get suckered in to her wide-eyed innocent routine. She's a thief and she's a liar. End trans.

[see more of this essay/open letter at As most of you know, I am not a supporter of people who xerox zines..]

When I was a CALICON in San Diego over last summer, it was my impression from talking to Alexis Fegan Black that she hadn't intended to write any more K/S novels. So my surprise was doubled when I picked up a copy of VAGABONDS at NASFIC in late August. Guess she changed her mind - for which this reader is eternally grateful.

VAGABONDS is considerably different from much of Ms. Black's K/S writing, in that it contains far more conflict between the characters of Kirk and Spock than usual. The story revolves around the idea that Dusk Blackcrow, a science department analyst of Native American descent, meets an untimely demise while on landing party duty. Since Spock and Blackcrow had developed an unusual friendship, he is devastated by her loss, and it causes him to begin questioning the fragility of life as well as his own position in life.

Through a series of touching (and often beautifully amusing) conversations between Kirk and Spock, the story unfolds. In his grief - which is handled by Ms. Black as more of a cosmic enlightening, and which Kirk refers to as a "beatnik" transformation -Spock leaves the Enterprise and goes to Earth, where he lives for a while on a reservation and is befriended by the tribal medicine chief. Bine Featherwind. Featherwind is reminiscent of the character of Sinta from Ms. Black's Year of the Ram and his insights and comments are beautifully revealing. Through his friendship with Featherwind, Spock comes to understand his deeper feelings for Kirk, and as the novel progresses, the two Startleet officers must face these mutual fears in a head-on confrontation.

One thing which I found interesting about VAGABONDS was that Ms. Black tells us that Dusk Blackcrow was the mother of Spock's son - conceived in the throes of pon farr. What I appreciated in this novel was that the child was never made a major part of the story, yet his presence was pivotal to the events. I was just thankful that the story didn't deteriorate into a re-play of Three Starfleet Officers and a Baby, which many fan writers have a tendency to do whenever a child enters the scene. Congrats to Alexis for avoiding this pitfall.

All in all, VAGABONDS is probably one of Ms. Black's best works so far. It demonstrates her unique writing style and incorporates her usual smattering of mysticism - this time from a Native American standpoint. VAGABONDS is printed slightly reduced on dark green paper, which at first I found shocking, but quickly adjusted to. Ms. Black's reasons for the paper are explained in her editorial, which detail the activities of zine pirates. The cover by Marilyn Cole is a striking portrait of Spock, complete with loincloth, carrying a mountain lion slung over his shoulders. When we read VAGABONDS, the significance of this striking piece of art quickly comes clear.

VAGABONDS is a must for any K/S fan - even for those who have drifted away from the genre for a few years, like myself. It renewed my faith that there are new possibilities in K/S. [1]

This novel is very different. If you liked the movie THUNDERHEART, this is for you. This is K/S mixed with American Indian mysticism. The Spock here is quite different, even shocking. I do have some reservations (pardon the cheap pun) about the novel, but overall it was good. The writing style was excellent. Actually it's a very sweet, but weird, K/S love story with the emphasis on the romance instead of sex. (I only mention that because many AFB novels are very sexually descriptive, and this one is different. This is a comment -- and NOT a criticism of either SEX stories or sweet stories.) [2]

They say you never forget your first time; I would recall this one even if it weren't the first slash zine I'd ever read, not to mention the first fan work. Spock's got a backbone and Kirk's not a jerk. [3]