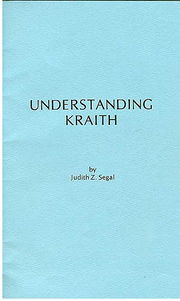 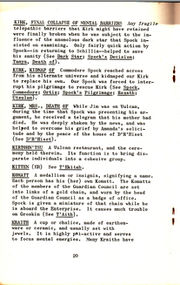 Understanding Kraith is a 40-page digest-sized Star Trek: TOS zine by Judith Z. Segal. It was written to bring some clarification to the "Kraithisms" in the Kraith shared universe.

"Judy Segal says: "The contents of this volume have been gleaned from the pages of Kraith Collected, Volumes 1 through 4, and from several other stories included in the later collections. In addition, conversations with the originator of Kraith--Jacqueline Lichtenberg--have enabled me to include some ideas that have not yet found their way into print. Unless otherwise credited, all the ideas, words, and interpretations presented here are original with Kraith."

From the zine's foreword: "This compendium is respectfully dedicated to: Jacqueline Lichtenberg and the other 48 Kraith Creators -- who made it all possible, and to Winston Howlett and 'Daniela Kendall,' who made it all necessary."

This zine was created partly in response to Inside Kraith and "Inside Kraith: A Follow-Up," two articles printed in Probe #11 (August 1977) and Probe #12 (February 1978). From the zine's editorial in Probe #12: "DANIELA KENDALL presents a follow-up to last issue's highly controversial article about the functions and malfunctions of the KRAITH writing system. After the many explosions and the settling of the dust, it was JACQUELINE LICHTENBERG herself (the creator of KRAITH) who provided the most viable and intelligent response to "Inside KRAITH" (our special thanks to JUDITH SEGAL for permitting the response to appear here)."

Kendall notes that "the project, and Ms. Lichtenberg's statement, deal with only a few of the issues raised in "Inside Kraith". The introduction to Understanding Kraith is reprinted in its entirety in Probe #12, and the editor Howlett adds the following: "This ends Probe's involvement with the subject of the Kraith writing system. "Inside Kraith" was published by Probe with the intention of pointing out some important issues about fan fiction writing and publishing, and to get some intelligent reaction to and discussion of a serious subject. Reactions from the general public ranged from favorable to disinterested. With the exception of Ms. Lichtenberg, Ms. Segal and one other person, reactions received from Kraith creators -- in person, by phone, by mail, and in other publications -- were less-than-logical and sometimes bordering on the inane. The subject is closed."

Excerpts from the Introduction to Understanding Kraith

MAY YOU LIVE LONG AND PROSPER.

You hold in your hand a unique research tool—a dictionary of Kraithisms. Many people have complained that terms which originated as part of the Kraith universe have been borrowed by other fan writers for use in their own non- Kraith-related universes. This sort of borrowing was fun and a great in-group joke when STrekdom was young and consisted of maybe 25 or 30 'zines and perhaps 1100 active fen. We all knew each other and we knew what the other fans were familiar with. It was what Edward T.Hall calls, in BEYOND CULTURE (a book every sf writer must read) a high-context culture. With the rapid influx of new fans (neofen) all afire with their own original ideas for STAR TREK derived stories, our high-context culture has strained to the breaking point trying to assimilate new people. Many of the old original 'zines are long out of print (though some editors are trying to bring them back into print). Most of Kraith is still available or will be reprinted periodically, but still, it often involves a delay of a year or more between entering fandom, finding the address of Kraith in the ST Welcommittee Directory, and actually laying hands on KCollected itself. The most well-meaning neofan writer has had enormous difficulty doing the primary research for a story. So what happens is that—burning up with the need to write her story—the neofan writer simply reads whatever 'zines she can lay her hands on, absorbs a subliminal impression of concepts and ideas, Vulcan customs, words, phrases, etc. that are taken for granted in fan stories, and proceeds to write her story in the fanzine vernacular as she has learned it. Very often these first attempts are so good that they carry the power of their own conviction, and a third generation who can't get the 'zines Neofan One used for her sources then picks up this second-hand information and uses it in her new stories. And so third and fourth generation fans are beginning to write for the *zines now, using Kraithisms (words and concepts originally coined in and for Kraith) without even knowing that they are Kraithisms, let alone where or how to look them up—or even that it is necessary to footnote sources on such borrowings.

When I wrote Kraith, I footnoted all the main stories for aired-Trek references, but not one editor ever saw fit to publish the footnotes. I am certain many well-meaning fan writers now are footnoting Kraith and editors are industriously deleting the footnotes because FICTION ISN'T FOOTNOTED.' Well, our high-context culture is long gone. It is no longer true that every ST fan knows all the 'zines every other ST fan has read recently. We must now cope with a low-context culture in which it is necessary to make every bit of background information highly explicit. A dictionary of Kraithisms should help with this task.

The reason it is necessary in our strange subculture called STrekdom to foot note our fiction is that we are working on derivative universes of a television show, and (for some people, at least) it is extremely important not to confuse aired-Trek established facts with "facts" made up unofficially by some fan. Some people feel that this is a copyright issue, and the borrowing of such terms as Kraith is miss a copyright infringement. Words,concepts, and ideas can't be copyrighted, so the borrowing of Kraithisms is not illegal. However, in the eyes of many fans, it does make the writer look like a sneak thief if she does not acknowledge her sources in some manner.

Perhaps editors will be willing to print footnote references to a numbered item in a Kraithism dictionary. I certainly hope so, for the confusion has become unbelievable, and Kraith is one of those primary sources which should be cited whenever it is borrowed from.

Words cannot be copyrighted, but they can be trademarked, which is a legal method of reserving the right of usage of a word identifying it with a product. Both Kraith and Sime are Jacqueline Lichtenberg trademarks over which I exercise assiduous quality control. Zeor is another Sime-related trade mark of my own which I reserve to my own usage, while all Sime-related copy rights are duly registered and reserved. You cannot simply write a story and call it a Kraith story. It must pass through the processes outlines in Kraith Collected, Vol. 5, and be assigned a number on my Master List.

But you can borrow words and phrases, ideas, concepts and background details from Kraith. Nobody — not me or any Kraith Creator—would call that plagiarism, provided it is done with the written permission of the author of the story in which the term or word was FIRST used.

The publication of this dictionary is not intended to be an effort on my part, or on the part of any other Kraith Creator, to exercise censorship or control over the borrowing of Kraith terms. Quite the contrary — we are flattered that you feel Kraith has such a powerful aura of plausibility that it is placed in virtually the same category as STAR TREK itself as a primary source. (And Kraith Is. a primary source: terms which appear elsewhere but also in Kraith were either established on the air, in THE MAKING OF STAR TREK, or in Kraith. Kraith does not borrow.[1])