You may be looking for the Due South zine, Two or the CSI: Miami zine, Together. 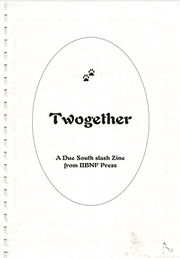 Twogether is a 178-page slash Fraser/Ray Vecchio anthology. It has a sister zine called Two.

Contents below from the publisher:

I actually loved Two, the first of these, best, but sold both of them at different times, because I'd moved on from DS and was still heartbroken and couldn't deal. Later I regretted it, and one day opened my mailbox to find a copy of Twogether from Snady, just so I could have a copy again. ♥ This one isn't going anywhere. [1]

I remember Bernice at one point complaining about not getting enough meaty stories. Well, from the looks of this zine, several someones herd her lament and gave her what she wanted in spades. There's still the odd bit of silliness--and believe me, some of it is really odd--but there's also a seriousness in here and a down right grittiness in one or two stories. And all of them are well put together.

I really like the way Bernice puts a zine together. The text is readable, which I do consider to be the most important thing in a fanzine, but there are little details that she sees to that make her zines unusual. I like the fact that she pubbed the LOCs for TWO, but also that she makes a point to address some of the questions and issues brought up. It's interesting to see the editor's opinions of why she does things the way she does. I also loved the fairly exhaustive list of DS zines, clubs, stories and online sources she compiled with a few comments at the very end of the zine. Very informative and nicely organized. And there are also even smaller details that for whatever reason--at least partly from the fact that you just don't see them usually--delight me, lik the little wolf cut-out at the bottom of the front cover. It's something that took a little extra time and it made the zine just that much more different.

I also like the color photos that she used this time. I particulrly like the clarity of them: Most times if you see repros of photos in zines, they are black and white at least and many times very badly done. When a picture is badly photocopied and ugly, many times that takes away from the overall look of the zine quite a bit, for me. This time both pics show everyone fully clothed (hey, you can't have everything!), the one at the front a nice 'family portriat' of Ray, Fraser and Dief and the other is a pic of Fraser as Ms. Fraser. The latter pic does show the one flaw in his posing as a woman, though (no, not that): His hands. Very broad and blunt, very much a man's hands. Okay, so that has nothing to do with the zine, it's just something I noticed.

I also appreciated, though was of course saddenedby, Bernice explaining the dedication to Rachael, the author of "If Your Heart Is Tired" in TWO, because the author committed suicide early this year. I had never heard about this and was very saddened by the loss of a promising new writer and a person I will now never get to meet. Pax to her, wherever she is.

(Thre were quite a few poems and such again, but as usual, I did not read them. No offense to the authors, I just rarely if ever read fan poetry.)

"Bubbles" by Gloria Lancaster--Proving that there is more than one cabin in the world--and one with indoor plumbing, no less!--this just made me think: Kinks revealed! Benny and Ray in a hot tub and peaches for Peaches, how much more could you ask from a nice, light-hearted opening to the zine?

"I Heard the Wind Call My Name" by Jane (of Australia)--I am not generally what you would call a Jane fan. However, despite a few minor nits--for instance, you do *not* give a wolf/dog a couple of choclate candy bars, especially if said wolf/dog is riding around in your beloved Riv and you want to keep both of them in top condition--I found the story surprisingly enjoyable. Fraser has a visitor in from the Territories who may or may not be a prime suspect in a case Ray is working on. That is, of course, more of a sub-plot to what said visitor may or may not be doing with Benny.

"Finding Our Way Home" by D. Ramsey--Fairly well written pwp with Ray spending the night at Benny's plac while trying to find out why Fraser's acting strangely.

"Front and Center" by Mona Moore--Well done vigette of Fraser standing guard duty and thinking about Ray. There *are* many things that red serge could hide...

"Peace, In the Struggle to Find Peace" by Julien--Built before, during and after "North", this story purports that Ray and Fraser had a near miss right before the episode starts. While I prefer the author's 'counrtin' story' in the last issue, this is still a piece that I really enjoyed. I like near misses--especially when they don't miss later in the story. And even sometimes when they still do, I'm easy.  :-)

"Shadow on Stone" by Jane Mailander--This is the 'grit' of the zine, though very well written grit. A large, wolf-like animal seems to be killing people connected somehow with Fraser. It's an interesting, very different idea andI liked it, but it definitely deserves it's little darkness warning at the end of the zine. I'd give it a Terri Warning Level 4: Stay away if you don't like it non-happy.

"UST" by Fallon Oxley--I am quickly developing a peeve against stories where the characters sit around and talk like fans of other shows. I know some people like it and objectively I see it as something that others would think of as a cute idea, but I just don't. In this case, Ray and Fraser are watching an X-Files marathon with Ray commenting on the UST between between Scully and Mulder. And isn't the accronym UST a very fannish and specifically net fanninh (or print fan with modemish) phrase? Would someone not in the loop be aware of it?

"Cliffs of Fall" by Trish Darvyfield--A well enough done pwp once again set around "North". However, I have a problem with heights, so the idea of dry humping with someone while fully clothed and your head hanging over a cliff just doesn't do much for me--or at least not what I assume the author intended.

"Paying the Rent" by Berdache--What should be a nice, kink-hitting (if you'll pardon the expression) story for me about Ray liking it rough instead leaves me more than a little wanting. I like what's here well enough, but there are several deeper emotional issues that I felt really should have been handled since their indicators were brought up--like Ray's refusal to give a safeword. These issues are sort of touhed on, but not to the extent I would have liked and a couple of facts that are dropped at the end of the story, rather than illuminating, almost kick me out of it, partly for their sudden appearance and lack of explanation.

"Due Date" by Quill--I'm getting the feeling that I am just not made to enjoy a story by this author. At best, I find her stories lacking in some indefinable something and at worst I don't believe them at all. This one falls somewhere in the middle with Fraser going out as Ms. Fraser (or Ray's cousin, Candide, as he's introduced) with a suddenly chauvenistic and sexually harrassing Lt. Welsh. And part of this is that I just don't share a fan-characters-in-drag kink that some fans seem to. I appreciated how he looked in it in the episode and how they handled the situation, not making Fraser into an overblown, characiture of a drag queen who wouldn't be able to convince *anyone* that he was a woman, but I really don't think Ray and he would choose this as something to do on a regular basis in their free time.

"Freedom's Just Another Word for Nothing Left to Lose" by Sarah Bellum--A sort of companion piece to Mona Moore's story, it actually reads as a sort of prequel to the new upcoming season from Ray's pov. Short and heart breaking.

"White Men Can't Jump to Conclusions in Stinky Shoes" by Sarah Bellum--On a completely different note, here's a little ditty that postulates that Fraser's personal hygiene might not be all that you think it is.

"1978" by Gillian Middleton--A six part, long story that ends the zine. The first parts deal with Ray's adolescence and his relationship with Frank Zuko. The second part is a sort of epilogue to "The Deal" and the third part is an epilogue to "Juliet is Bleeding". But the last three parts, aside from a cameo appearance and a few references, seems to have little to do with the first three and Ray's relationship to Zuko. Instead, they are much more like a seperate story about Ray and Fraser's growing relationship which is just set in the same universe. The characterisation is very good, though it does veer towards curtain hanging (no actual curtains were purchased in the making of this story, though other household items--and households--were). Still, not without at least a small amount of angst. I do have a problem with Ray volunteering to work for a gay/lesbian/bi/trans organization after coming out, but it was set up where it didn't bother me as much as it might.

Some very solid stories this time out, in fact, I think I enjoyed it even more than the first issue. Very good word count-to-price deal and quality-to-price deal, I think. I recommend it to everyone, though with one or two exceptions, it might not be what the hard-core h/c fan is looking for. But it's certainly worth a look in any case. I'm really looking forward to the next issue, titled BONDED. [2]