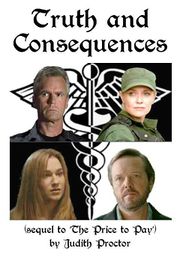 Truth and Consequences is a gen 86-page novel by Judith Proctor. and the sequel to The Price to Pay. Cover created by Kathryn Andersen.

Writing this sequel presented several interesting problems. Seasons 6 and 7 for starters. Although this novel is AU and set around the end of season 5, later seasons present some background information that I had to choose whether or not to incorporate into the story background. I've tried to be consistent with later episodes where possible, in the details of Jaffa and Tok'ra culture, etc.. However, where a later season flatly contradicts continuity from earlier seasons, I'm sticking with earlier seasons. This is particularly relevant to Jack and Kantele. When Selmak joined Jacob, he warned Jacob that he couldn't just jump into his body, cure his cancer and leave again. Similarly, Jolinar said that she could leave Sam, but only at the risk of her own life. In other words, a Tok'ra cannot take a host and casually move on again: it's a union for life and can only be severed by risking the life of both host and symbiote.

In the same vein, Teal'c cannot sense the presence of Goa'uld. This was clearly the case in early episodes such as 'The Enemy Within' and 'In The Line of Duty', and I'm just ignoring stuff written by certain later writers (eg. The Tomb) who couldn't be bothered to actually watch the previous episodes of the series they were writing for.

Having a symbiote die inside you causes the release of a toxin which can be dangerous for the host and potentially fatal without good medical care. Here, I'm going with 'In the Line of Duty', 'Crossroads' and 'Summit' (and the implications of what happened to Teal'c's father in 'Fair Game') and ignoring 'Nightwalkers'.

Goa'uld larvae take 6-7 years to mature. They may be able to take a host (with imperfect control) when a little younger than this, but there is no way they are ready much before that. (ie. forget 'Nightwalkers' again, but remember 'The Enemy Within') Rya'c would be dead by now if they matured any faster, as he has Teal'c's original symbiote.

Jaffa have no choice but to take a symbiote when they reach puberty. Early episodes were ambiguous on this score, but later ones are clear cut. [1]

This novel is a sequel to 'The Price to Pay' and it will only make sense if you read the other novel first.

Everyone has an agenda. The rebel Jaffa want freedom. The Asgard are playing a double game. Lord Yu has his own inscrutable plans. President Kinsey has ambitions too.

Amongst all these schemes, how are O'Neill and Sunlight going to find each other again? Can Sam, Daniel and Teal'c help?

Can Cassandra stay sane after losing everyone she loves?

Can Kantele help his friends when he has problems of his own?

The team members are forced up against personal truths: O'Neill and his relationship with Kantele, and how it affects his relationship with Sam. Teal'c faces the most serious consequences of the Jaffa rebellion, including risk to his friend Rak'nor and his son Rya'c. Cassandra learns some truths she'd rather not have known about. Frasier faces an ethical dilemma. And Maybourne? Well, his problem is that someone once believed him.