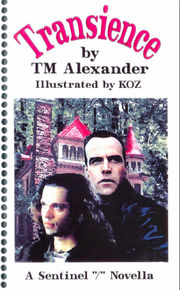 Transience is a slash 182-page Sentinel novel by TM Alexander. Cover and interior art by KOZ.

While investigating a case, Jim and Blair come across an old mansion. Thinking he hears noises, Jim goes inside and is hit on the head. When he wakes up, he finds himself in another time. Read this spine-chilling zine and solve the mystery of a decades-old murder and a Sentinel with, not five, but six heightened senses.

This is another of my "it came to me in a dream" stories. I swear, I don't make these things up - my subconscious does! All joking aside, now...!'ve always had very vivid dreams; often, they're like movies. As my Sig 0 would say, they come complete with a musical score, cast, and opening and closing credits. This was no exception.

I was just finishing up the last story for Sentiments. My first novel, Gemini, wasn't quite three weeks old. I only know that when I woke up, I realized I had to take down some notes and go back to it later. I took a day off to relax before launching into my next project (which was supposed to be X-Files related) and wound up researching historical facts about Washington state as I worked out the details of the dream story. This is entirely from Jim's p.o.v. (In my dream, I was Ellison!) It's a murder mystery, a timeless love story, and it even asks that favorite question among writers and readers of fanfic: what if? What if Jim and Blair were destined to meet, even before they were born? What if they knew each other before that fateful day in Storage Closet #3? My take on those answers can be found in the following pages.

Thanks to everyone who welcomed us - my partner Paulle and me - into the TS fold. It's wonderful to be a part of a fandom that not only has a huge fellowship, but it's also devoted to a show that's current (as opposed to one long off the air and shown only in rerun syndication). Thanks also to Lynn, for the facts about Washington state (trees and srum); and KOZ, for the ever-fantastic illustrations. (I knew she'd love drawing for this one!)

When a hunting party discovers the decaying ruins of an old manor, complete with a skeleton hidden under leaves and grass at its rusty gate, a certain Cascade Detective is summoned to help despite his cold and headache. Dosed up with natural remedies Ellison makes it to "Howland's Odyssey", Sandburg by his side, to join Cpt. Banks in the investigation. The rotting house, once the pride of a rich contractor, now refuses to give away its secrets, though. Only an old nickelodeon, when urged, plays Claire de Lune.

And then one of the beams of the building crashes down and buries Ellison, the screeching sounds of the dying nickelodeon the last thing he hears for a long time.

The Detective wakes up to discover he is the guest in a rich man's house, a beautiful woman inviting him to dinner even though he had been injured when falling off a shying horse and there are 18th century's clothes in the bedroom's drawers. When he runs into Sandburg, a weight is lifted from his heart: The young man was obviously not injured when the house collapsed. But Sandburg does not remember him - he has never met the Detective before, but is all eager to talk to him: Sandburg is an author, writing crime-stories.

The mystery unravels as the time passes, jealous, hatefilled siblings arguing over their heritage as well as loving, trying to make a run from "Howland's Odyssey" and Sandburg slowly falling in love with the man who has literally fallen into his life. A magical night in front of the nickelodeon, kissing and loving to the music of Claire de Lune makes Ellison realize that his dreams have come true. But schemes and greed lead to a terrible climax...

Again Ellison wakes, devastated, terrified, thinking there is still his lover's blood on his hands. But Sandburg is kneeling next to him, worried about him being unconscious for such a long time.

Together they watch the manor crumble into a heap of stones and tiles, after having exposed its secrets one last time. The biggest secret, though, is still waiting for Jim at home (where some surprises lurk, too: To discover how much of his dream has been an illusion, how much is going to be fulfilled...)

TM Alexander is able to create two different worlds in one novella. The pace of her story as well as the tone of her writing changes, as Ellison struggles to solve a mystery in Victorian times, his sometimes deliberately out-of-place phrasing a reminder that he does not belong into this era, even though his spirit guide insists he should stay.

Her beautiful conclusion: Jim and Blair are two souls that belong together no matter where or when in time they meet, no matter how long it takes them to face that truth together. This novella always warms my heart - a captivating story, terrific illos and wonderful writing, it is an all-time-fav of mine, full of heart-wrenching grief and very hot sex! If you like AU's, you'll love that one. (me, now going to reread that 'zine!) [1]