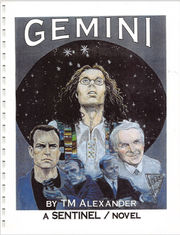 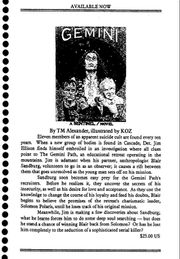 Gemini is a Sentinel Jim/Blair 223-page novel by TM Alexander. The art is by KOZ.

This story was fan casted by the author, something the author had also done in the zine Broken Wings.

The zine is dedicated to Ann Walton "for years of laughter, support, warmth, music, beauty and love... and for turning us on to THE SENTINEL."

Eleven members of an apparent suicide cult are found every ten years. When a new group of bodies is found in Cascade, Det. Jim Ellison finds himself embroiled in an investigation where all clues point to The Gemini Path, an educational retreat operating in the mountains. Jim is adamant when his partner, anthropologist Blair Sandburg, volunteers to go in as an observer; it causes a rift between them that goes unresolved as the young man sets off on his mission. Sandburg soon becomes easy prey for the Gemini Path's recruiters. Before he realizes it, they uncover the secrets of his insecurity, as well as his desire for love and acceptance. As they use the knowledge to change the course of his loyalty and feed his doubts, Blair begins to believe the promises of the retreat's charismatic leader, Solomon Polaris, until he loses track of his original mission. Meanwhile, Jim is making a few discoveries about Sandburg; what he learns forces him to do some deep soul searching but does he stand a chance of winning Blair back from Solomon? Or has he lost him completely to the seduction of a sophisticated serial killer?

Blair infiltrates a murderous cult at Simon's request. Can Jim rescue his Guide before Blair joins 10 other 'Chosen Ones' on their journey...into death?

At the same time, I wanted to understand what made them tick, wanted to know all the details of their lives. Just like any good cop or anthropologist would. Granted, these observations are completely my own opinion, how I as a writer interpret them. But I did try — as I always do, when I am about to embark on a new story in a new fandom — to take all the facts from the show into consideration.

The idea for this story kinda hit me head-on. I'd been toying with several ideas, jotting down notes for a variety of smaller stories when it came to me. It hasn't been that long since news of the Heaven's Gate mass suicide hit the media, but cults have been around for decades. In the '70's, we had movies like "Blinded by the Light" and "Ticket to Heaven." Many may remember the Jonestown incident, or more recently the Branch Davidians. Why do so many sane people, some well-to-do, allow themselves to be pulled into such situations? What is it that makes them follow a man on some wild spiritual quest that too often ends in death? I've always believed people have the right to worship as they please, yet I am filled with these questions. How many people can say that they would die for their beliefs, and actually mean it? And by that same token, is it wrong for us to condemn such people as lunatics simply for proving their faith? I have tried to address this issue with the care it should be given. The cult I've created does not exist; I combined elements from several groups to come up with something timely yet age-old.

I have also endeavored to present all the elements that fans enjoy most about TS. I always try to present a story that is episodic in context — like turning on the television, only with the extra spice of a romantic relationship between the principal characters. After all, you want a story about Blair and Jim — not a story where you could change the names and make it any other fannish pair. Well, I feel the same way. I mean, they axe the reason we love this show, right?

I never would have "discovered" this fandom if it weren't for two people. Annie Walton is the prime suspect. At MediaWest*Con 17, this little woman got me curious as she showed me photos she'd taken from various episodes. She proceeded to answer all my questions about the characters and the series' premise. I almost balked when I started to watch the show, but Annie came to the rescue with some greatly appreciated videotapes...and on the Fourth of July, the fireworks, going off at this house were not in celebration of Independence Day. We had found The Sentinel. So, Annie — you're to blame. THANK YOU!!!!

Another tip of the hat goes to the online group SENAD, for being so supportive and giving us hours of laughs and for welcoming us in to share this great love affair between a curly little teaching fellow and his big, butch former Army Ranger. (Adds all new meaning to "covert ops," don't it? Heh heh heh....) Being a part of this group helped to re-connect me with some old friends, including one of the most intelligent and well-spoken women I have ever met, who acted as an editor/proofer in the eleventh hour. Sharon, I cannot thank you enough for the much-needed assistance. Big hugs, lady!

Also, I want to acknowledge one of my eternal inspirations, Alan Parsons, for the music of Eye in the Sky, from which I took the openers for each chapter. The novella's name is the title of a song that begins with the words "watching...listening...touching...feeling...seeing...believing." Is this a Sentinel song, or what?

This is a wonderfully written, very intriguing story. T.M. has done a superb job of exploring how cults operate; how a charismatic leader can exploit human weaknesses to serve their own purpose. In this extremely well-written story Blair joins a cult in an undercover capacity in an effort to stop more members from dying. The cult leader recognizes Blair's weaknesses and uses that against him. Jim has to "kidnap" Blair from the cult and seeks help to "deprogram" him. T.M. did a great job with this part as well. This isn't a "weak" Blair story, though. Blair shows surprising strength of character once he learns just how much support he really does have. Great angsty, first-time story. [1]

The story opens with a mass suicide of cult members. I liked the story a lot. We have a very lonely, sad and unloved Blair for most of it. In fact if there was one thing that bothered me, it was Jim and Blair being separated during 3/4 of the story. (I'm probably exaggerating.)... I really did love this zine. It's one that grabs your attention and doesn't let you relax until it's all over with. Nerve wracking comes to mind... The drawings all through it are by Koz. They are just wonderful. I've never read TM Alexander or seen any art by Koz, so this was indeed a fantastic treat [2]