To Journey's End is a Kirk/Spock story by Ursula Tulle. 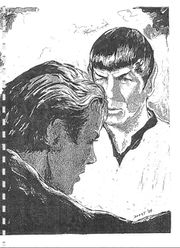 "Amanda bullies Spock into proposing to Kirk, but after he is turned down, both men have difficulty with what has happened until Kirk finally realizes that the ship canʼt be all there is to his life."

A very good story. The dialogue between McCoy and Amanda was especially well-done, with their plotting to push K and S into a relationship only proving - quite heartbreakingly to Spock - not only the dangers of interference in other people's lives, but also the fact of the right thing at the wrong time. I could really feel Spock's withdrawal into himself at Kirk's refusal. I also liked all the little references to the various ST episodes. [1]

Another excellent - and long - story in NT20 is TO JOURNEY'S END. Now this story alone is worth the price of the zine. Beginning after JOURNEY TO BABEL, it details how Kirk and Spock come to be lovers - using bits and pieces from actual episodes to make point. This story is beautifully written, moving along at just the right pace. The underlying sub-plot of Amanda and McCoy also gives it a very human touch. [2]

Amanda, when portrayed as a caring and somewhat manipulative mother, is always a treat. She has a very revealing conversation with McCoy as Kirk, Spock and Sarek recover following the events of the Journey to Babel. A resourceful woman in her own right, she decides to try to implement change in Vulcan's policy toward release of medical data. An admirable challenge.

Later, a most promising conversation between Kirk and Spock takes a bad turn when Kirk declares his loyalty to his ship overrides all other desires and the inevitable withdrawal takes place.

The author touches on a number of episodes, hastily glossing over each one. It would have been more effective to either explore each in more detail or to have never mentioned them at all. Apparently each snippet was meant to either explain the effect of the particular mission on the relationship, which it barely did. Perhaps it was meant only to convey the passing of time. Either way, the relationship was pretty much ignored while this occurred. Perhaps there was simply a rush to get to the "good part", which did, indeed, come to pass.

I liked the way it ended, with McCoy spilling the beans to Sarek and Amanda like a proud papa. [3]

The conspiring between Amanda and McCoy to get Kirk and Spock together backfires when Kirk refuses to bond with Spock. The scene where Spock drops to his knees and asks Kirk to become his bondmate brings the house down. Kirk‘s rejection cries out.

I was anxious to find out where Spock would find the strength to go on as if nothing had happened. Unfortunately, that remains a blank. Kirk has sex with several females and even a male. We get no reaction from Spock? The time between Kirk‘s rejection of Spock and his admission to Spock about filling the emptiness inside is given as an intermezzo—facts only. Taking us on a journey through their feelings, letting us feel with them and through them just isn‘t there. Then we come to the scene where Kirk asks Spock to bond them and Spock casually accepts without much ado. I don‘t think so.

I enjoyed the first part, but the second and third part couldn‘t entice me. In particular because there is no apparent structure which might give us an insight into their emotions and how they‘ve been dealing with the changing situation between them. [4]