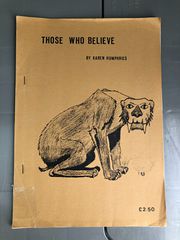 Those Who Believe is a slash 59-page Star Trek: TOS novel written by Karen Humphries and published in the UK. It was also published in J.K.S. #3. Front cover illustration is credited to "J.D. Tribble."

From Gilda F: "After his return to the ship after being mistakenly reported dead, Spock takes Kirk to Vulcan so that his captain can regain his strength after brought low by a virus and by his shock at thinking heʼd lost Spock."

A nice little zine about our friend taking leave on Vulcan. Kirk is recovering from an illness and is still somewhat weak. They have a nice time on Vulcan and deepen their relation. For the humor there is the meeting that Kirk has with a sehlat who doesn't want to leave him. The story leaps from one scene to the other leaving lot of missing pieces in my pov. The sex is good, but the author portrays Kirk as a rather spoiled and weak girl as you find them in the old movies.[1]