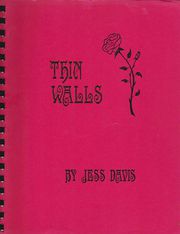 Thin Walls is a het 120-page Beauty and the Beast novel by Jess Davis.

Quiet 4th season novel in which Catherine returns as a ghost. She and Vincent (who, at first, is the only one who can see her) discuss whether she ought to remain with him permanently. Young Satanists are holding ceremonies involving the sacrifice of children in an outlying tunnel: the approach must be sealed before Joe can investigate. Jenny/Joe romance blooms. [1]

Reality is becoming a non-defined word these days. Pre-post- or alternative-to season three? Catherine alive, dead or. . . something else? In view of the controversy over the latter idea that these two zines have generated. I'm offering a review and comparison [of "Thin Walls" and .... Shall Have No Dominion]

These full-length one-story zines both take the B&TB story beyond the third season into a fantasy world in which Catherine did indeed die, but is returned to Vincent as an enigmatic spirit, able to appear and disappear — but flesh-and-blood solid and real. It sounds like an impossible concept but both authors deal with it mature and convincing manner, confident in their hearts that this possibility is just as real (there's that word again) as any other.

It's possible that both authors have been less than candid about the nature of their stories, but this may be due to their fear that many classic fans will reject the idea without even a fair trial, as well as their desire to keep the device a surprise. Unfortunately, this has had to some negative repercussions, as some purchasers have felt they were misled. It's my belief, as in all things, that bringing it all out in the open so that each person can make an informed decision is the best route to take.

In "Kristopher Gentian" style, both authors leave the mystery of Catherine s return intact with a minimum of explanation, but she is undeniably warm, passionate and real in Vincent's arms. The bond is regained, and when they are together, they are two people deeply in love, finally able to move forward through the obstacles between them.

Kleinsorge's writing is more focused on emotion, interaction and character development and is as she claims delightfully " sensual" in content.

Davis's story weaves Catherine's incredible return into an intricate plot development with a lot of interesting exposure given to Joe Maxwell and Jenny Aaronson. as well as Vincent, Father and the tunnel dwellers. This story was begun before the third season aired — quite a leap of imagination for someone who hadn't been dragged through hell and back yet. Both stories set up a new vista for the lovers, and leave themselves open for sequels.

My friend Joyce Fuller Kleikamp, whom I had expected to reject this new concept from the start actually embraced it more warmly than I did. While she prefers that Catherine be "really" alive, she found the idea of Catherine as a returned spirit to have some distinct advantages. There is no longer her work or her separate life Above to keep her apart from Vincent threats to her life would no longer force Vincent into "beast mode" and ravage his sanity. She would be forever safe in his arms, always available when he needed her or she needed him; her presence was with him whether she was visible or not.

Joyce says," I found the spirit Catherine to be a warm, lovely ethereal, but 'real' presence. Vincent is finally able to accept her love, and both lovers are free to explore the limitless shores of their eternal spiritual bond In fact the possibilities inherent in such a spirit-lover are extremely intriguing. The text makes it clear that their physical love is just as fulfilling, if not more so, than had they united as two' mortal' lovers."

"When the Bluebird Sings" is widely acclaimed to be one of the fans' favorite episodes. The actor who plays *ghost* Kristopher is of course very attractive, but I would assume that a lot of the show's appeal stems from the seductive mystery of his existence. He knows things he couldn't know; he's here and then he's gone— but he drinks cappuccino. If we can suspend our disbelief for Kristopher, perhaps we should consider giving Catherine the same opportunity.

In my personal rating system of 1 (worst) and 5 (best), I ranked Dominion a 4, mainly because I like an emotional story better, and Thin Walk a worthy 3. The writing in both is high quality. However, after reading both books with an open mind.

I decided this entire scenario is not my choice of alternatives. Joyce on the other hand, is looking forward eagerly to the sequels. We both encourage others to keep an open mind and make your own decisions. [2]