the sandwich story is a Calvin & Hobbes fic by Meredith, written for Katarik for Yuletide 2008. It became one of the most popular and widely recced stories for that year's challenge and received over 200 comments. 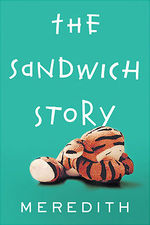 Cover for the sandwich story designed by Christopher Brian King for the article "It's a Fanmade World" (New York Magazine, March 2015). 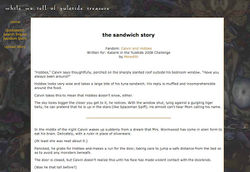 Screenshot of the story as it appeared on the yuletidetreasure.org Yuletide archive.

For Yuletide 2009, hradzka's story The Cable & Deadpool Yuletide Special interwove itself with the sandwich story and several other Yuletide classics.[2]

In 2015, they story was included on a "Fanfiction Syllabus" list of "ten classics that cover the history, breadth, and depth of [fanfiction]," from the article It's a Fanmade World: From One Direction to Soderbergh published in New York Magazine. Meredith wrote of its inclusion:

"oh my fucking god, this is me! That’s me! This is such a weird trip. I wrote the sandwich story when I was 15 or 16 in about twenty minutes for Yuletide and then I never participated again as far as I can remember. I think it got like 200 comments, which I was super proud of, and then I forgot about it. I didn’t even remember what I’d called it. And now it’s in a class syllabus and a Vulture story next to The Shoebox Project. Whoever made the cover — thank you! It’s so beautiful! And hellotailor and bookshop, thank you for your work on the story. Wow, this is so cool."[3]

There's a reason why this heartwrenching little story is the best-known fic in C&H fandom; it yanks and pulls at your heartstrings, without manipulating the emotions.[4]

Although The Sandwich Story might be exactly the sort of Calvin and Hobbes story you DON'T want to read, you should read it anyway. It's about the loss of childhood innocence and imagination - a well-crafted but unsentimental tearjerker.[5]

Inevitable and heartbreaking. But the amazing and good kind of heartbreaking. I don't know, I always thought it'd be too painful to read a story about Calvin growing older, but this... it's honestly beautiful.[6]

I was riveted by the first scene -- it sounds and feels like the comic. The rest of the story tells us what might happen when Calvin grows up a bit. Excellent writing and a simply wonderful story.[7]

A very short mostly-verse with the precise and perfect pacing of the original strips. Pitch-perfect; sometimes brevity is right.[8]

FYI: Likely to induce weeping. This one is being recced all over the place, and it deserves every bit of it. Sad, lyrical, sad, believable, and did I mention sad?[9]

This is a realistic, sweet, heartbreaking, but still true-to-the-series story about Calvin eventually growing up.

And clearly this is an AU, because Calvin never actually grows up. No, really. He doesn't. Shut up, he doesn't! Growing up sucks. I need a beer.

Read it, and watch this [Robot Chicken's Calvin & Hobbes spoof] afterward if you need to fend off the tears.[10]