The Way Forward: Crusades of Blake

The Way Forward: Crusades of Blake is a gen 165-page Blake's 7 anthology. Front cover and interior graphics (most of them in colour) by Pat Fenech. Full colour back cover by Diane Holland. 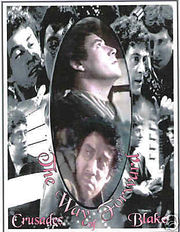 The first all-Blake genzine of the new millennium has arrived. "The Way Forward: Crusades of Blake" is 165 A4 pages packed with stories and poetry by a variety of fan writers, old and new. Front cover and interior graphics (most of them in colour) by Pat Fenech. Full colour back cover by Diane Holland. Contains the following stories:

See reactions and reviews for The Choice.

If you enjoy stories about Blake, you will like this 165 page new genzine. If you are a fanzine collector, you definitely want to add this to your collection since zines mainly devoted to Blake are rather rare. It's an enjoyable read with only one clunker in it (imo) and a little poetry. A few of these stories are reprints, but most of the zine is original material. I'm not into poetry so I really can't comment on that aspect. Some of the other people who wrote stories I liked were Pat Fenech, Jacquelyn Taylor, Jean B. Hubb, Sondra Sweigman, and Curtiss Hoffman. This zine is refreshing is that it isn't marred by stupid stories with Blake or the crew acting like buffoons. Blake is not presented as a saint who walks on water in the stories. He's shown as a courageous man with flaws making hard decisions and sometimes errors as he fights an overwhelming enemy. It is so great for me to read a zine where there is not one story that bashes him because the writer thinks that is the only way to make her favorite--whether it be Avon, Vila, or Tarrant --a more likable hero. The zine is somewhat organized chronologically with the first stories starting with "The Way Back" time period and the last stories happening after "Blake." If I were giving this zine a letter grade, I'd say it's definitely a solid B. More specific flyers are available [email address redacted] if you are intrigued but still not sure about buying this zine. [2]

This is the most stunningly beautiful B7 zine I have ever seen-- absolutely gorgeous visually. I adore the photo montages. The zine is clearly a labor of love-- I assume it must have been printed out one copy at a time on someone's personal color printer, rather than sent to a professional print shop. The results are well worth the trouble.

The stories are good, too. As the title of the zine makes clear, all deal with Blake and his Cause. Personally, I'm not convinced that either Blake or Avon are really such noble characters as they seem to be in some of the stories here (for example, "Altered Options," the A-B alternate "Orbit" story); but all the stories are sufficiently well written that I could happily suspend my disbelief for the duration of the story. It helps that the zine is extremely well edited; I didn't find any typoes or grammar or spelling flaws at all!

My personal favorite is the story by Sally Manton, "Fellow Feeling," based on an interesting point seldom mentioned by fan writers: the fact that both Blake and Vila, alone of the crew, personally experienced Federation mindaltering techniques. It's very logical that they might have reactions long afterward, as described here. Lovely angst! The story focusses on Blake and Vila, but all the Series 2 characters get their due as the author follows them through the painful process of Blake's remaining deprogramming after "Voice from the Past."

I also very much liked Pat Fenech's exquisite "Claims of Obligation." It is generally assumed that Avon found out about Anna Grant's supposed death at the hands of Shrinker back on Earth, pre-"Way Back"; but suppose it was not until a bit later, during the time frame of the aired canon, that he got the information?

The sequence "Kayn's Hands" and "Blake's Heart" appealed to me as a well-thought-out alternative version of Series 1, in which Gan dies during the brain operation in "Breakdown." What might have happened next, to all the remaining crew, and to the surgeon Kayn?

"The Choice" and "A Few Minutes More" have been favorites of mine since their original publications; it's good to have them available again.

I'm a fan of Ebony's poetry and was thrilled to have some more examples of it. I also like Sondra Sweigman's poetry; I think the idealism and intense emotionality of her treatment of the A-B relationship sometimes come over more effectively, for me, in poetry than in prose.

Recommended. Extra highly recommended if you're a Blake fan, or like gorgeous visuals. [3]

This is a big fat zine (166 pp) which speaks of the love that the editor and her contributors have for the series and its ideals, and especially for the character of Blake. The presentation is excellent, with generally clear typesetting (though the sans font was a bit fuzzy in the ink-jet printout), some nice greyed-out images of Blake behind the title pages, and a sturdy format. Personally I'd have preferred a cheaper black-and-white approach, saving the colour printer for occasional pictures, but Pat Fenech's colour photomontages are very pretty.

Few of the stories in 'The Way Forward' try to recreate the goal-oriented adventures of the original series; still fewer play with its science fictional trappings. There's also little speculation here about what ordinary life might have been like in the cramped and sterile environment of the Earth Domes. Instead, most of the stories examine Blake's character, either taking an introspective approach or revealing the man through his actions. The former approach is exemplified by 'Wind-Up Toy', in which Jacquelyn Taylor postulates that Blake fears he's being used by the Federation to betray his friends. ('Kayn's Hands' is another well-written 'what-if' piece by the same author.) The latter approach is taken by Sondra Sweigman's chilling 'The Choice', which highlights Blake's ultra-manipulative side. Also by 'Grey Scale' (Jean B Hubb), which retells an incident from the Second World War. For its original setting, plausible characters and realistic moral dilemma, this story was my pick of the zine.

The rest of the crew isn't entirely neglected in 'The Way Forward's focus on Blake. Sally Manton's 'Fellow Feeling' has a plausible Vila narrator, while Michael J Miller ('The Ghost of You') creates an engaging cameo of a post-'Blake' Soolin struggling to come to terms with disability. While several stories feature Avon, surprisingly, Jenna and Cally play only minor roles. Criticism of a 'men-only crusade' is only partially allayed by a plethora of female one-off characters, who do feel a bit like 'the usual suspects'.

Serious zines focusing on Blake face a few problems. Blake's lack of memory can make him a somewhat dull or confusing PoV character. The fragments we know of his background can make for repetition among stories that try to mesh closely with the series. There are few opportunities to expand the cast to include season 3 or 4 characters. Most seriously, perhaps, as few, if any, of us are revolutionaries by trade it's difficult to portray this side of his character realistically. Thankfully, 'The Way Forward' doesn't succumb to the temptation to whitewash Blake. Despite its gen classification, the zine doesn't shrink from violence, torture and killing, nor does it glorify any of them. On the whole, though, the stories in 'The Way Forward' have an upbeat feel, which occasionally seemed slightly at odds with the subject matter. I'm not convinced that the virtues celebrated here would survive under Federation repression, but it's nice to hope. [4]

'A Word from the Heart'

In Pat Fenech's story, 'No Good Thing Ever Dies', Ravella recalls that it was Blake who christened the Freedom Party. 'So like Blake,' she comments, 'a word from the heart.' The motif of the heart is one of the most recurrent in this collection, used by different authors but essentially implying the same meaning. It is a notion closely related to Blake's decisions and actions, his chosen mode of living and his impact on others.

'The heart' covers much more than just one's emotional or intuitive response to the world. In these stories, it is used to denote the core of one's being, the deepest layer of psyche, the 'heart' of the self. The authors often suggest that Blake is in thrall of this 'heart', hearing and obeying the voice from the centre of being which determines his whole attitude to reality. First and foremost, it inspires his feeling of obligation, his persistence in the struggle against the Federation. In Sondra Sweigman's 'Proclamation of Principles', Blake writes that the urge to fight against injustice comes from 'the one voice' which stands 'behind the many languages of the Universe.' 'It is the voice of the heart and of the spirit.' 'If he had a choice in this matter, he no longer recognised one', Jacquelyne Taylor writes in 'Wind-up Toy'. After he has witnessed the massacre of Bran Foster's rebel group, Blake is tormented by doubts about his sanity, his conditioning and his past. Still, he returns to the Dome because his conscience demands it. 'You do have a choice,' he says to Vila in Sally Manton's 'Fellow Feeling'. 'And you don't?' 'It never feels like I have one,' Blake replies.

'The heart' also refers to one's essential core of goodness and humanity which (at least as some of the authors believe) is capable of withstanding any oppression. Because Blake has managed to keep this core intact, he is able to make his 'way back' and restore his former self. The deepest realm of his being hasn't been affected by mind-manipulation. Sondra Sweigman writes in one of her poems, 'If mind's so easily rendered dust,/ The heart is all that's left to trust:/ A vault the torturer could not enter-/ A solid, bright and blazing centre.' Pat Fenech expresses the same idea by entitling her story 'No Good Thing Ever Dies'.

However, while Blake abides by the 'words from the heart', the resulting decisions and actions collide with the wills of other people, and with his own fears and doubts, often creating an impression that the world around him is chaotic and that nothing in it makes sense. In Jacquelyne Taylor's AU story 'Kayn's Hands', Kayn fails to save Gan's life. Blake, however, decides not to carry out his threat and neither maims nor kills the surgeon. Unexpectedly, this course of action triggers a whole chain of tragic events which result in the deaths of his entire crew. What Blake thought was a correct moral choice turns out to have the disastrous outcome. Universe and its rules appear to be chaotic and unjust:

'There was no sense of order to a random universe, nothing made any sense; the price of sparing an enemy's hands was the lives of four friends; people died for no particular reason, they called your name as if you could do something about it.... meanwhile, the berserk juggernaut of the Federation crushed anything in its path, bending and breaking people into cogs for the machine, forcing order out of the chaos Blake tried so desperately to preserve, to defend...'

The only alternative to 'a random universe' seems to be the totalitarian order imposed by the Federation, characterized by brutality and violation of basic human liberties. Even in his confused state of mind, Blake refuses to accept such an inhuman order and rather opts for the chaotic freedom of a universe he cannot comprehend. [5]