The Ultimate Xena Fan Fiction Directory (or UFFD) is an index site for Xena: Warrior Princess fanfiction. A description from main page in 1999:

"What exactly IS the Ultimate Xena Fan Fiction Directory?"

"What do the recommendations on some of the stories mean?"

The site was founded by CN Winters and over the years a number of different people have been involved in maintaining and running the UFFN. About the origin of the site:

In February 1998, no longer enamored with the series and because she had other commitments to fulfill, Xenos announced the closing of the XENA: WARRIOR PRINCESS FAN FICTION INDEX. From the short-term crisis that followed, as fanfic readers scrambled to fill the void, not one but three new indexes emerged. Shadowfen turned her own personal database into SHADOWFEN'S XENA:WARRIOR PRINCESS FAN FICTION INDEX, making available also what has become one of the most popular What's New pages in the Xenaverse. Three NetForum regulars, Del_kaidin, Absinthe and CN Winters organized a collaborative effort which would give birth to the ULTIMATE FANFIC DIRECTORY, featuring a number of helpful new subject indexes."[5]

The first version of the page was hosted by Geocities.[6] 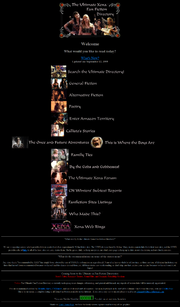