The Swollen Bud Awards was a Xena fanfic award for quality in XWP fanfiction and was given out by a committee of readers and writers.

The Swollen Bud committee is a group of Xenites, bards, beta readers and discerning fans from around the world, who have come together in order to enlighten Xena fans from everywhere about... exceptional fan fiction.[1]

The public mission statement was first posted online February 28, 2000. Like many important things in the Xenaverse the whole awards process happened behind closed doors and for someone not part of the group the committee remained anonymous. The winners were announced sporadically throughout the year. Whether or not a story won the award depended on someone nominating it and the members of the committee agreeing that it fulfilled their standard of writing excellence, but the stories didn't compete with each other, which meant that the awards could be given out to more than one story in a category or another category could remain empty because nothing fit there.

Eligible for nomination was:

X:WP Fan fiction of ALL types (alternative, general, traditional, and/or uber AND ranging in explicitness from G and PG to NC-17) [...] (The provocative name of the awards program and of its categories were chosen for the purpose of catching reader's attention, NOT to signal graphic content.) Whatever their nature, stories are NOT considered for awards until they have been completed.[1] 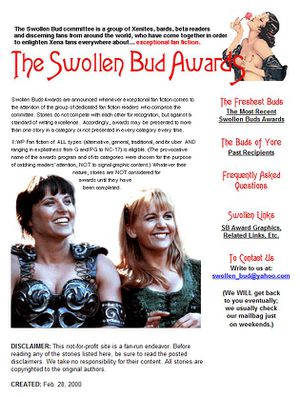 Interesting about this is that the definition of ALL types didn't include het or slash. Whether this was because het was supposed to be covered by general and slash by alternative or because it was assumed that these genres couldn't possibly produce fanfiction that would meet the committee's standards of excellence is difficult to say, but it shows that the default assumption was that good fanfiction was Xena/Gabrielle fanfiction.

Several of the longer stories that were winners of a Swollen Bud Award were uber novels that were also published as profic with the serial numbers filed off. Part of what the committee was trying to achieve was to draw reader attention to some of the very best in X:WP fan fiction and inspire authors to continue to hone their own writing skills and provide readers of online fiction with more and more stories that rivaled or exceeded in quality the ones published commercially.[2] As such the award site worked as a recommendation page.

One of the Frequently Asked Questions was: "Do we reference Lunacy's site? MaryD's?"[2] The question and that it was a frequent one shows that there might have been some concern about BNF groups determining what's good and what isn't. It might also just be a feature of having the committee remain anonymous. Whatever the criteria, the winners often were considered some of the best in the Xena altfic world and the story collection listed on the award site gives a good insight into what X/G fans at that time liked and produced.

The first awards were given out March 15, 2000 and the last update was March 15, 2004. The Swollen Bud Awards site is now defunct and can only be reached via Wayback but the winners are also listed on the PDA Fiction site where many of the stories are available formatted for the Palm or PocketPC.