The Sting is a Kirk/Spock story by Triad. 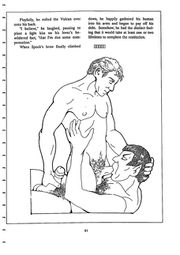 "Out of funds while on shoreleave, Kirk takes McCoy's suggestion to sell his services after Spock agrees to buy him dinner."

THE STING is a humorous story, and even though it's predictable throughout, the writing is good and it's a step above the majority of Trek humor I read in zines. [1]

Shore leave and Kirk has run out of money. Not wishing to return to the ship and work he attempts to borrow money from McCoy. The Doctor refuses and suggests that Kirk should ask Spock who just happens to be sitting at a table in a nearby restaurant. Spock invites Kirk to join him for a meal but Kirk refuses and explains his lack of funds, saying that McCoy has suggested that he 'sell his body'. There follows a little verbal fencing until Spock ends it by offering to supply his friend with the necessary funds. Kirk refuses and is surprised when Spock says 'I wasn't thinking of a loan.'

Our intrepid captain is very quick at understanding things - it must be his famed intuition or merely wishful thinking. Still, he does, at first, think that Spock is joking and goes along with it by informing Spock of exactly what it would cost to purchase his services for the night. He is more than taken aback when after due consideration Spock decides he can afford JTK and explains, quite logically, that 'You have a need. I have a need.' After a few moments Kirk accepts and the rest of the story is a nicely done seduction.

This is a short story - light, funny but with some depth which allowed me to ignore the odd hiccup in the plotting. For instance how did McCoy know that Kirk was going to run out of money and arrange 'the sting' with Spock? Then the meal is eaten in the space of a paragraph - an ideal way to get indigestion. There is also the occasional paragraph that could use the attention of a proof-reader or editor but nothing that confuses too much. [2]

Poor Kirk. He's on leave, has three days left on a friendly planet, and he's flat broke! McCoy's no help. Just suggests he might try selling himself to get a little positive cash flow.

Along comes Spock. A willing buyer! Unexpected, isn't it? Or is it? What was that little gesture Spock & McCoy exchanged behind Kirk's back?

This is unencumbered and fun. Two experience men, each surprisingly aware of what he wants and not especially hesitant about getting it.

The progression of the "sale" is quite enchanting and entertaining and the loving is all we've come to expect—no bargain basement affection, this! Even Spock's confession that he and McCoy set Kirk up comes as no real surprise to either the reader or to Kirk, who takes it all laying down (pun intended). You'll all be happy to know this purchase comes with a lifetime guarantee, no returns allowed. [3]