This organization was founded primarily by Ted Hruschak and Mona Delitsky, and several other members who were dissatisfied with aspects of The International Space: 1999 Alliance.

They formed this short-lived, off-shoot group that was unable to survive due to the small size of Space: 1999 fandom.

The first Space: 1999 convention in the USA, SpaceCon I, was held in 1978. The event was an unqualified success. Special guests included Gerry Anderson, Nick Tate, Clifton Jones, David Prowse, Barry Gray and, Martin Landau. A variety of SF films was featured, including two uncut episodes of Space: 1999: "Breakaway" and "War Games". Thanks to the enthusiastic response of the 800 or more fans who attended the convention, a special charity auction and a dinner with the special guests made possible a donation of over $6000 to Children's Hospital in Columbus. 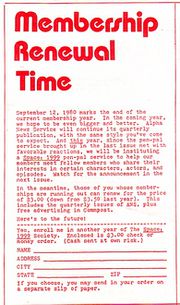 Prior to and during Convention 1978, however, Ted and Mona found it necessary to raise objections to the structure and leadership of the Alliance. No offices such as President, Vice President, Treasurer, etc. had ever been created or voted upon by the co-ordinators, yet one member of the group had assumed Such an office without an election. In addition, the self-appointed President created a set of by-laws without the knowledge or approval of the rest of the Alliance co-ordinators. Despite repeated attempts by Ted Hruschak to negotiate a mutually agreeable solution for the continued unified operation of the Alliance, the disagreements were never resolved. When the self-appointed President made it clear he did not intend to step down.

In October 1978, Dan Pallotta returned as an active participant, having been prevented from working on Convention 1978 by commitments to work and college. David Barnes and Brian Anderson, who also worked on SpaceCon I, decided to join Ted and Mona. The organization which had begun as "Save: 1999" almost two years before, in mid-October was now broken into two groups: The Space: 1999 Society and the International Space: 1999 Alliance.

Work began at once, from scratch, to build membership and to sponsor their own convention. The Society applied for and was granted Space: 1999 licensing from Hanna-Barbera Productions, Inc., the copyright-holder at that time, early in 1979. Non-profit status was pending with the IRS, and while convention plans were temporarily postponed due to unforeseen problems and a certain amount of bad will, The Space: 1999 Society attempted to grow its ranks of dedicated fans. The purposes of The Space: 1999 Society remained what they were in the early days of "Save: 1999": to draw together people who appreciate, enjoy, and wish to revitalize Space; 1999, to direct a unified effort to keep the program "on the air" wherever possible and to help preserve the program for posterity. Even though Space: 1999 is the focus of these efforts, other quality science fiction productions by Gerry and Sylvia Anderson will receive similar support. As a secondary purpose, the Society is dedicated to benefit its members and the rest of society by giving monetary donations or lending other support to selected charitable organizations which are working to improve the human condition. This secondary purpose is part of the focus of the Society's annual convention.

The Space: 1999 Society was set-up to be an informally structured, nonprofit organization, responsive to its members and dedicated to their interests. The organization was operated by a Board of Directors with each Director given a separate function and sharing in the overall workload; no single person represented the organization. This was set-up to assure that no one person could unduly influence the organization. All communication from members is routed through one address, allowing quick, direct reply to members' requests.

Alpha News Service was the official news publication of the Society. Issued four times a year, Alpha Mews Service was a forum for interaction and communication between members. News contained in ANS will focus on Society activities, news in 1999 fandom, and SF in general.

December marks the third anniversary of the creation of The Space:1999 Society and the movement to save Space:1999.... The origins of the Space:1999 Society date back to December 1976, when Ted Hruschak and Dan Pallotta created the Save: 1999 Campaign, an effort to organize a write-in campaign to prevent the impending cancellation of Space:1999 in February 1977. "Save: 1999" began its effort by taking a test ad in The Cauldron, the student newspaper of Cleveland State University, publicizing the write-in campaign and the organization. In addition, "Save: 1999" applied for recognition as an official student organization at the university. As a student organization applicant, "Save: 1999" was able to place posters in various campus buildings and set up an information table. Potential members were offered advice on writing to the networks about Space: 1999 . Special "Save: 1999" stickers were also distributed. Progress was slow until just after ITC cancelled Space, when Ted Hruschak met fanzine publisher Mona Delitsky, who was laying the groundwork for the first-anywhere Space:1999 convention. "Save: 1999" was the ideal vehicle for the convention effort. Mona enlisted the aid of several other dedicated Space fans and "Save: 1999" was rechristened as The National Save: 1999 Alliance. The NSNA was intended to be an informally-structured, non-profit organization operated by fans as a service to other fans. A letter describing the organization and offering information about the upcoming convention in return for nothing more than an SASE was published in Starlog magazine. By no means the first Space: 1999 group to be created, the Alliance nevertheless brought together a large number of Space: 1999 fans and successfully sponsored Space: 1999 Convention 1978 in Columbus, Ohio.[1]

Demise of the Group

There is an open letter from "The Space:1999 Society" in Command Center in 1980 announcing its disbandment due to to a drastic falling off of fan support, increasing costs of conventions and other activities:

...none of this has been helped by the comments which have appeared in the promotional literature and a few of the newsletters of one of fandom's largest groups relating to disagreements which occurred between the co-originators of the Space: 1999 1978 sponsored by the original Space: 1999 Alliance. Although we will not qualify those attempts to damage our credibility with rebuttal, we will state that we consider those actions to have been both unfair and irresponsible, for the simple reason that we were unable to express our point of view to the same body of Space: 1999 fans. our single attempt to explain our views in Alpha News Service #2 was responded to with sarcasm, false accusations and by having our statements quoted out-of-context... The result has been the development of an undercurrent of hostility in fandom which has manifested itself in the form of rumor-mongering and slander, directed at first against the Society and most recently against groups which only traded newsletters with us. We did what we could to put an end to it, but the hostility is still there. That, perhaps, is the greatest disappointment. We sincerely thank all of our present and former members for their support, and we especially thank those who contributed letters and suggestions. We hope that everyone will keep foremost in mind the messages and ideals of Space:1999 and that hope for its renewal will continue. [2]

"I have noted the various comments about the demise of The SPACE:1999 Society, and there appear to he some misconceptions floating about. Since I was one of the Society's directors, I'd like to clarify a couple of things, without trying to revive old hostilities. One: there was never any great division of fandom over the much-misunderstood dispute. The original disagreements and the subsequent 'cold war' involved only the leadership of the two groups, not the memberships. In fact, the majority of Society members were also members of the Alliance. Two: the direct cause of the Society's closing was a 75% loss of membership from 1979/19S0. Continued operation was financially impractical and, in view of the general attitude as we perceived it, very likely futile. Three: the issues involved in the dispute, as we saw them, were issues or ethics rather than pride. The issue about the names used by either group developed after the split occurred. Four: finally, the Society was never represented as being anything other than what we considered it to be. All we ever did was to maintain our point of view and to stand our ground. If, in so doing, we confused or offended people, then I apologize. The SPACE:1999 Society may not have been the greatest fan club in history, but it was an honest effort. The organization and our convention plans may not have amounted to very much, but we were here and we tried, and I'm proud to have been a part of it. [3]