The Shadow Knight is a het Beauty and the Beast anthology edited by Kay Simon and Sharon Wells.

It is an zine of SND 3rd season stories.

The Shadow Knight 1 was published in December 1990 and contains 212 pages. This zine has a plastic sheet cover with the title written on it, gray heavy paper underneath with the artwork. 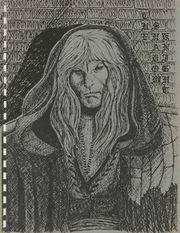 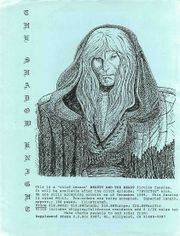 flyer for issue #1
From an ad:

HERE ARE THE STORIES YOU WISHED THEY WOULD HAVE SHOWN US IN THE THIRD SEASON! Some of the stories included are:

Several stories in this anthology seek to fill in missing scenes and tie up the loose ends of the 3rd season. Diana appears throughout and while she is in love with Vincent, he is too grief-stricken to notice . Zine concludes with 'The Rescue' in which Elliot, Diana and Vincent save Catherine from Gabriel's organization. Nice imagery. [2]

Lots of stuff to read. SND 3rd season. One of the first & best “Catherine in the witness protection program, and "what the hell does the ring mean?” stories. [3]

I would like to say THANK YOU for your zine The Shadow Knight. In this zine you did something that the writers failed to do in the nine episodes that we viewed— you made Diana a real character. To say the least, I was not at all impressed with the character of Diana during the third season, I always felt there was something missing and after reading The Shadow Knight, I can say I might have enjoyed Diana better on the small screen if Jo Anderson could have played her the way you wrote her. Thank you for bringing to life a character that I had completely written-off. I may never enjoy seeing the character in the show, but your zine has made reading about the character a lot more bearable. THANKS! [4] 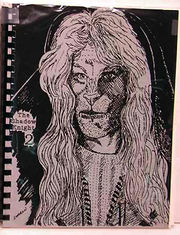 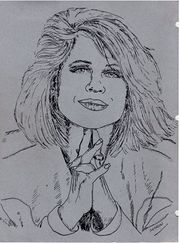 back cover of issue #2, Sharon Wells

The Shadow Knight 2 was published in January 1991 and contains 194 pages.

This second and last volume of the series offers up more possible scenarios for Catherine's return. In 'Walk Slowly: Love Softiy,' Vincent travels to the Atterworid to find Catherine. This zine also contains the conclusion to 'The Rescue' found in Volume 1. Diana appears as a friend. [5]

Stories vary from superb to questionable, says reviewer. Let's count the ways we can bring Catherine back! Just about every possible scenario from Vincent descending to the Underworld, to zombies, to an amnesia victim wandering amidst Oregon trees (no fooling!). It boggles the mind....[6]