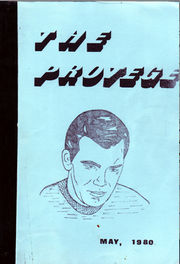 It was published in the U.K. and required an age statement to purchase.

This zine contains no interior illustrations. An optical illusion in the white space surrounding the chosen title font makes it appear to read "Provege".

Summary from the publisher's ad in Universal Translator #4: "'The Protege' is a K/S novel set in an alternate universe where Earth, having lost a long and bitter war against the Federation, is kept in bondage, affording other planets cheap labor and slaves. Against this background, Kirk meets Spock, first as equals, and then as Slave and Master... can their relationship survive?"

Summary from unknown source: "This novel deals with Starfleet coming in and conquering Earth, leaving Andorians and Vulcans in charge. The story revolves in part around Sarek, his son Spock, and their protégé, a young James Kirk of Conquered Earth."

Summary from Gilda F: "The slave, Kirk, is bought by an elder Vulcan who wishes to teach him to be a standard bearer for the people of Earth."'

Issued in 1980, it is an Alternate Universe story that neatly manages to avoid excessive bondage & violence, weak characterization & feeble plot. Earth has lost its war against the Federation & its leading ally, Vulcan. The story opens with Kirk's defiance of a petty regulation. This defiance & strength of will attracts the attention of an old Vulcan Elder who has been searching for a human with some spirit to complete certain plans he had been formulating. Meanwhile Captain Spock experiences a thoroughly unpleasant Pon Farr in which his chosen female sought the Challenge. He survives Plak-tow but is now unbonded. It becomes apparent as the plot unfolds that Kirk ahs been brought to Vulcan by Sehan, the Vulcan Elder, in order to try & train him in Vulcan ways. The old Vulcan hopes to show that humans are worthy of membership of the Federation, whereas Spock's orders are to ensure that Kirk does not succeed. Against this background, the two meet & are attracted to one another. When Sehan dies under mysterious circumstances, Kirk's freedom is again removed from him & he finds himself Spock's slave. "His lips were forced open as the Vulcan's tongue insolently entered his mouth, the Vulcan moved back and leaning up on one elbow looked down into the hazel eyes of his slave 'I want you, Jim'. Kirk sighed 'You own me, Spock....I'm your property, bought and paid for...and even if I resist you're stronger than me, so what's the point? You won't get any response, but I've no choice, so get on with it." The rest of the story depicts the steady and growing love between the two men. Finally, both are forced to acknowledge their relationship has moved beyond external roles. This is very much a hurt/comfort story & will appeal to those who enjoy a few emotive setbacks in the otherwise predictable road to bondship. Even so, the past is fast-moving & the principal characters familiar to us; not obscure persons labelled Kirk & Spock as sometimes occurs in Alternate Universe fiction. Overall, a story that begs & was probably written for a sequel. However, the plot more than stands on its own, & as far as I'm concerned, this zine has most definitely established itself as a firm favourite.[1]

In this A/u story Earth is conquered by the Federation and due to their aggressive behaviour their inhabitants are heavily punished. They are allowed to have only one child. Every other child is sold as slave. This war was 50 years ago but Earth still has to pay. Vulcan has a leading role in this. Their economy has become very dependent on the cheap labor of those slaves in this 50 years.

Kirk is a second son and thus his fate is to be sold as a slave. At school he is discovered by an old Vulcan, who is looking for a suitable human boy. He wants to show to Vulcan that humans are capable of living as a Vulcan, hoping to free the people at last. Kirk is taken to Vulcan and although he hates Vulcans as every human does soon learns to respect his protector. He gets a good education and learns how to behave on Vulcan. He is not a slave and his protector declares him free man. Captain Spock, who is on leave on Vulcan, is ordered by Sarek and T’Pau to test the human in his behavior and although he doesn’t expect much from it, he soon is charmed from the young human.

But then Kirk’s protector dies. Kirk is sold as a slave again and Spock buys him, of course. They have a lot of trouble and misunderstanding to go but finally they end assigned together on the Enterprise. The story misses a lot of chances to make it interesting The idea is good, but it is told with too little details almost as if the writer was afraid the story would be too long.[2]