The Orion Warrior is a gen SF zine with a slant to Star Trek: TOS. Its creator was a high school student.

1978: Lee Sobel published The Orion Warrior #12. At first, TOW was a fanzine that focused on general SF, with a slant on Star Trek. With issue #12 (an amazing 66 pages!) Lee changed the focus of the fanzine to an all-Lost in Space format. Issue #12 was also the last issue of TOW as such. In Lee's own words: ". . .The response (to Orion Warrior #12) was so overwhelming that I decided to create The Galaxy Gift solely for Lost in Space fans... TGG was well-noted for having a hefty page count and a good variety of interviews in each issue. It is the first Lost in Space zine to have been distributed internationally. (For the trivia minded, Ken Holland's artwork appeared for the first time in TGG.) [1] 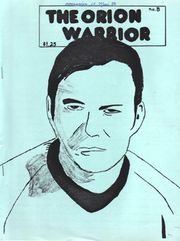 inside pages from issue #8

The Orion Warrior 8 was published in Spring 1977. 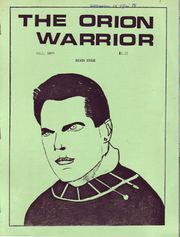 inside pages from issue #9

The Orion Warrior 9 was published in Fall 1977.

From the zine's introduction:

Lee Sobel uncovers 'The Cage,' Star Trek's first Pilot film that never made it to our televisions screens, and the two part episode that contained stock footage, 'The Menagerie.' In this article, you'll find Bios on Jeff Hunter and Susan Oliver, a short description of the Keepers and the world they live in, we wouldn't want to forget those pint-sized beings that were actually portrayed by old women, dubbed over by male voices. If you're a Twilight Zone freak you may remember Meg Wyllie (lead Talosian) in the 'Night of the Meek' episode, where she was quite female. We also tell you a little about the Enterprise itself and of its crew, back when Gene Roddenberry was first starting Star Trek.

We also look at Star Wars, a George Lucas film. Despite the conciseness of the article, there is a follow-up in the planning. Check out the article on the new Star Trek II show that is supposed to hit the air waves in the Spring. This month in the story columns you can find the second part of 'Whatever Happened to Bones?' and the introductory part to a story called, 'Shuttlecraft to Hell,' a story that was inspired by my English class at school that is covering the The Old Testament. Also is the interview with Majel Barrett, Nurse Chapel on Star Trek, that appeared in the fourth issue of The Orion Warrior. Among other things, you should find this issue a winner." -- The Editor

The Orion Warrior 12 was published in 1978. It became a Lost in Space fanzine. It was the last issue and was continued as The Galaxy Gift.