The Mask of Khufu 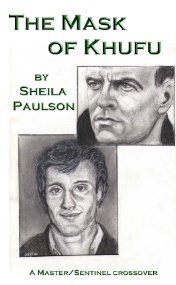 The Mask of Khufu is a gen crossover novel by Sheila Paulson. It is digest size and has 204 pages. Cover and interior fanart are by L.A. Adolf.

From the distributor, Agent With Style: "A master of martial arts and his student cross paths with Jim and Blair. When two men from Naomi Sandburg's past focus their attention on Blair after the press conference announcing that he's a fraud, it could end up being very deadly for Blair Sandburg. And perhaps just as deadly for them. Will Jim be able to save Blair without sacrificing his honour? Will Naomi's secret end up hurting them all? After all this time, could the answer of who is Blair's father finally be revealed?"