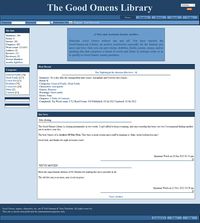 The Good Omens Library is a Good Omens archive for "stories, drabbles, ficlets, poems, essays, and/or anything else that comprises a bunch of words and letters in strategic order so as to qualify as Good Omens' omeny goodness."

In July of 2013, Quantum Witch began manually importing works from the original efiction archive to an AO3 collection with assistance from Open Doors.[5] This import was completed in November of 2013.

On the efiction archive, fanfiction was sorted into the following categories. The number next to the category name indicates the number of stories in that category as of April 17, 2013.[6]

In addition, the following ratings, characters, genres and warnings were to categorise works: