The Ghostbusters Live From the Bermuda Triangle 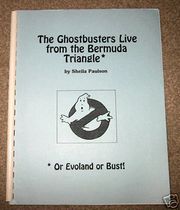 From the fanzine flyer: "Leave it to Peter to wheel and deal his way to a TV special direct from the Bermuda Triangle. So while Egon sulks, Ray looks for adventure and Winston comes along for the ride, Peter leads the gang into a mysterious greenish cloud that transports them from the sunny Atlantic to a mysterious land where the only way home might kill them instead. They team up with a group of travelers led by Varian, a healer from the future. Varian, Fred, Scott, Willaway and Liana first save then join the guys in finding the mythic Evoland."