The Force on Air

The Force on Air is a gen Star Wars zine published in Italy. They are the transcription of the Star Wars Radio Show by Brian Daley. The zines are both English and Italian. 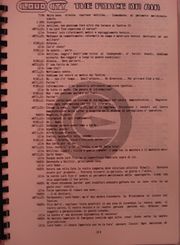 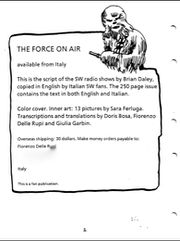 flyer for issue #2 from Southern Enclave #28 and Anakin

The Two volumes of THE FORCE ON AIR series are the result of a long and outstanding research work, as they feature the transcription of the Star Wars Radio Show series by Brian Daley. Each volume features the English transcription of the two scripts and the relative Italian translation; together, the two versions form a volume of over 200 pages which contains all the dialogues, the scenes and the events transmitted in 1980-83 by National Public Radio.

Each episode of the series is introduced by a full page art composition by Italian SW and CC illustrators Sara Ferluga and Stefano Vimercati. The volumes also feature color covers by Graziano Cossu (volume I) and Mario Zorzi (volume II).

Both volumes are available from Cloud City