cover of The First Duty 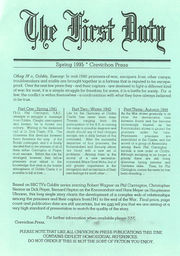 The First Duty is a long slash novel by Sue and Sal originating in BBC's Colditz, with pairings of Player/Carrington and Ulmann/Kommandant. The zine is 234 pages long. It includes a list of cast members, a glossary, and a brief guide to the origins and events of the Second World War. The authors put an impressive amount of time, research, and work into this story and the result is well worth all the effort.

The novel was later released to the net and is available at The Android's Dungeon and was also available at Slash Cotillion, the historical slash archive.

From a 1994 flyer: "PLEASE NOTE THAT LIKE ALL CREVICHON PRESS PUBLICATIONS THIS ZINE CONTAINS EXPLICIT HOMOSEXUAL REFERENCES. DO NOT ORDER IF THIS IS NOT THE SORT OF FICTION YOU ENJOY."

Summary: "Based on the BBC TV Series 'Colditz', this long single story (twenty two chapters) tells of the friendships and relationships that develop amongst the prisoners and their captors in Nazi Germany's famous 'escape-proof' fortress."[1]

Summary from the author's page: "Between May 27th and June 4th, 1940, a flotilla of seven hundred vessels of all shapes and sizes evacuated almost 350,000 Allied officers and men from the beaches of Dunkirk. For those who were not able to get away - or who were already prisoners of the Germans - a long and tedious captivity was just beginning."

From the author's notes:

And if you're one of the people who have been waiting two years or more for this zine, thank you for your patience. We think it's true to say that we had no idea what we were getting into with this epic - which just goes to prove that one should never wander around the streets of Salisbury on Saturday nights in November ... Every time we thought we were getting close to the end, we discovered some other aspects of the plot that needed to be tackled; it's been a lot of work but we've enjoyed it.

The origins of the story go back a very long way, as those of you who subscribe to Late For Breakfast will know. Player and Carrington were Sue's first-ever slash couple, pre-dating even Kirk and Spock, and it was well past time their story found its way onto paper. Sal's ideas about Ulmann and the Kommandant came along a little later, but the two relationships seemed to fit together so well that it seemed natural to try and write the whole saga in one story. It got a bit more massive than we expected, that's all.

We know most people will be aware of the origins and history of the Second World War. However, we thought it was worthwhile including a short resumé to provide background and also a glossary of abbreviations and German words we use frequently.

One thing we're grateful for is the tolerant attitude of German slash fans towards this epic. We were a little nervous about introducing our German friends to episodes of 'Colditz' at Devacon, but their response was reassuring. (The boots? The boots!)

By the time you read this we will (God and weather permitting) actually have visited Colditz Castle - which probably means we will want to rewrite bits of this - but we'll resist otherwise it will never see the light of day!

One German reviewer said in her comments:

Sue and Sal concentrate on the interpersonal relationships that, in the show, weren't explored enough, conclude some characters' fates that were simply dropped, but most of all, they give us an understanding of the main protagonists' thoughts and feelings, and make us aware of what drives them in this bleak time. I have rarely been so impressed. Sue assured me that the lack of a black-and-white painting of the German officers came from the show, but no matter how much the events of this story might be based on the series - the credit for style and insight into the characters and their motivations certainly go to her and Sal. I cannot find the words to say how much I love this story. [2]

A review in German: