The Escape from New York Affair

The Escape from New York Affair is a het crossover three zine series co-authored by C.W. Walker and Nan Mack. The covers are by Suzan Lovett.

Notes from the Authors

In the first issue, the two authors explained at length the writing process and how this zine came to be.

The zine you are holding in your hand is the result of a unique form of collaboration. The formal name for the process is 'Mediated Interactive Role-playing Narrative (MIRN)'. FOr the past thirteen months, we've simply called it 'the game.' It all started in March 1991. Nan was becoming interested in Snake Plissken and the Escape from New York universe, and of course, we'd both written U.N.C.L.E. stories in the past. In a telephone conversation and over the computer modem, we began... On weekend, I sent the first two pages of what became this novel over the modem. It was just a short scene: Solo walking into a bar that Nan had imaged in one of her 'Escape' stories. The accompanying message said, 'Wanna do some stunt-writing?' I'm not sure whether it was a lark, a joke, or a challenge. I suppose there were elements of each.

The first issue is subtitled, "The Escape from New York Affair." It was published in 1992 and contains 163 pages. 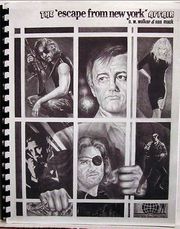 This is a story based on the characters from The Man From Uncle and the film Escape From New York. The premise of the story is that Thrush has won and has been in power for several years. What remains of the former Uncle HQ is within New York Max, Illya is missing, and Solo (a weary survivor of long term thrush torture) is tasked with getting into Uncle HQ to retrieve the Uncle files for the resistance. To do this he needs to persuade the only man who has successfully entered and escaped New York Max, Snake Plissken, to go with him. [1]

Hell of a novel. Pulls you in and doesn't let you go. Taut, gripping narrative, doesn't shy away from moments of genuine horror but nonetheless promises redemption. Doesn't "feel" so much like U.N.C.L.E. as like the dark, fascinating universe next door. Splendid treatment of Napoleon's strengths and weaknesses; I especially like the scenes where he is seen through the eyes of other characters and we recognize him as if meeting an old friend. I usually prefer stories that read like episodes, so the fact that I enjoyed this despite my preferences argues for its high quality. [2]

The Escape from New York Affair is a classic example of a crossover story done right. Here, Cindy Walker and Nan Mack bring together two very powerful characters within the framework of a tense and highly effective story. Make no mistake about it, this one is a real page-turner.

The two characters in question are Snake Plissken, of the film, Escape from New York, and, of course, our dear Napoleon Solo. While the pair might seem incongruous at first, it only takes a few pages to realize what a masterstroke it is to set them side by side. Snake is a man who has been so badly battered that he has nearly lost his humanity. He doesn't believe in causes, only survival. Napoleon Solo is a man who must believe in a cause to survive and this story puts him in the position of having to make Snake believe, too. The moral and philosophical tug of war between these two is the force that drives this zine, as together they go into New York Max (the city of New York, walled off and turned into a maximum security prison) and confront one horror after another on their way to UNCLE Headquarters to retrieve data which could very well save the world.

It is a rare thing, indeed, for a fan story to manage to carry off both action and character growth as well as is done here, and it is a marvel to behold. We see both characters learning about each other through their experiences in New York Max, and, little by little, gaining respect for one another. At the same time, we are caught up in the twists and turns of the plot, with surprises waiting around every corner.

I came into this story knowing precious little about the film, Escape from New York, but that did not lessen my enjoyment of it in the least. The authors give you all the information you need in a very short, compact introduction, and then the tale takes off. Character development is deftly blended with plot exposition, and before you know it, you're completely swept up in the dark, frightening world they have painted.

But, you might ask, what if I don't like Escape from New York? Well, join the club-I didn't dislike the film, but I was never a great fan of it, either. Once you get into this tale, that simply doesn't matter. As written by Nan Mack, Snake Plissken is afforded a depth and a power that should keep any reader spellbound-and, of course, Cindy Walker displays her usual high level of perception and skill in writing for Napoleon Solo.

So, if you like Napoleon-or Snake-or you simply enjoy reading strongly written fan fiction, then what are you waiting for? Go out and get yourself a copy. And if you need any more encouragement, how's this? The Escape from New York Affair also sports a nifty cover by Suzan Lovett. The concept is clever, and as expected, the execution is brilliant. Who could possibly ask for more? [3]

The second issue is subtitled, "Fugitives: A Love Story." It was published in 1993 and contains 84 pages. It contains one "character chart" but no other interior art.

"Napoleon and Dee Dee team up to save themselves." 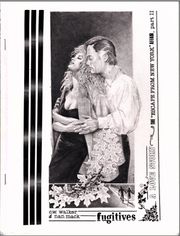 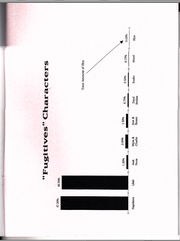 the inside back cover of issue #2, "character chart"

The third issue is subtitled, "Reunion." It was published in 1996 by Nan Mack and contains 246 pages. It has art by Suzan Lovett and Hindman. 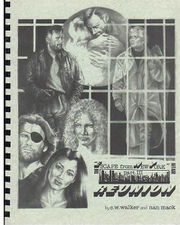 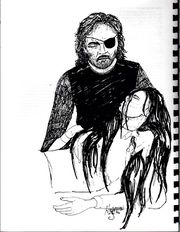 inside art from issue #3, Hindman