The Dream Within a Dream Affair

You may be looking for the German Star Trek: TOS zine, Dream Within a Dream. 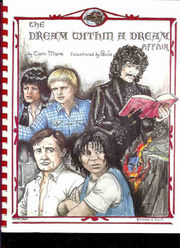 The Dream Within a Dream Affair is a gen 91-page novel written by TM Alexander. Cover art is by Paulie. The story is set in New Mexico.

Summary from a distributor, Agent With Style: "Under the influence of Edgar Allen Poe's writings, Tami Marie, illustrated by Paulie, has written a novel that will chill you to the bone. Illya has begun to have dreams of Napoleon being in great danger and being unable to save him, having to watch him die night after night. The nightmares are tearing him apart and badly affecting his relationship with his partner. Are the dreams merely the result of a particularly violent assignment -- or a portent of things to come?"

Summary from a flyer: "A rash of dreams is destroying some of U.N.C.L.E.'s finest teams--and now it looks like Solo and Kuryakin are next . They follow their only lead to arid New Mexico, and encounter a southwestern agent bent on finding her missing partner...whom she believes is still alive. Native American mysticism twines with a psychotic's vengeance in this second novella from the author of THE CIRCLE OF STONES AFFAIR."

From a July 1993 ad in GAZ: "Some of UNCLE'S top teams are being split up in a very unique manner; one has a dream of the other's death, and a few days later the nightmare become reality. Unwiling to admit to having similar visions, Kuryakin is ordered to accompany his partner to UNCLE'S Southwestern Headquarters in New Mexico, and investigate the mater further. There they meet with few clues, lots of dead-ends, and a female agent who is desperately trying to locate her missing partner before another body can be added to the rising count. Can Ilya find the connection between the grisly murders and the one repeating clue, a stately Raven...before his dreams become reality"