You may be looking for April Fools, a Xena/X-Files zine. 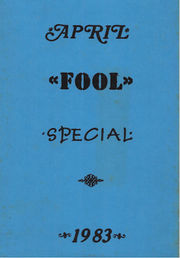 The April Fool Special is a gen multifandom 84-page anthology.

The zine contains 84 pages. All stories are by Sheryl Adsit. The portraits are by J.R. Dunster.

Greetings and felicitations! I was right; April Fool was not limited to 32 pages. It wasn't limited to 52 pages. I certainly hope its final total of 84 pages does not disappoint anyone. The length of the material, as well as certain complex mundane problems, account for most of the delay in getting this to press. Please forgive me.

For those of you who wish to contribute towards paying the printer, $3.00 is an acceptable donation. (I think it's worth it, but then, I'm prejudiced.)

Credit-Where-Credit-ls-Due Department! All stories are by Sheryl Adsit. The portraits are by Jackie Dunster. All other graphic embellishment is by me. (I also wish to thank Jayme O'Darcy, Joyce Muskat, and Cynthia Levlne for their "angelic" support. There's more than one way to contribute to a fanzine.)

I look forward to hearing your comments on this effort. Any suggestions on "universes" you'd like to see? I've got several other projects in the works for the summer and fall, and of course, the new season might bring so much more grist for the mill ....

[a review of all three zines in the set]:

You know what's astonishing? To receive not one, but several unsolicited small zines in the mail — and they turn out to be terrific. Don't be misled by Adsit's "aw, shucks" attitude in her introductions; these stories are far from amateur. "Don't Steele My Hart Away," "Steele's Law," and "Over the Ocean" in particular could and ought to have been episodes on REMINGTON STEELE and KNIGHTRIDER. In the first, Laura is vouchsafing the security of a designer-jeans ad campaign while Steele seems to go out of his way to joggle her elbow, including appear to be a were-poodle. "Steele's Law" deals with topiary theft and why it's a big deal, while "Over the Ocean," the KNIGHTRIDER piece, is a thoroughly satisfying tale of spies, bombs, and code meanings in the international auto industry.

In every one of her stories, Adsit provides delightful, accurate, imaginative details that weave a seamless tale. It is a pure pleasure to enter her exegeses of these TV universes because the characters, the events, even the throwaway lines are real, proportionate, and human. In "Over the Ocean" not only the phrases but the landscape are accurately rendered, so it's like a quick trip to Germany with Michael and KITT. In "Triple A Service" (A TEAM) , the frenzied pace of events Amy calls "the jazz" is so integral to the story, the reader gets to feel the jazz herself.

Adsit gives plot. She's a regular Robert Heinlein for stories that overslop with plot. Even in the shortest throwaway vignette, such as "Christmas Goose" (TALES OF THE BRASS MONKEY), there is a story within a story. But best of all are the characterizations. Whether there's but two people in the scene ("Occupational Hazard"; BRING-'EM BACK ALIVE) or over half a dozen ("Postmarked: Cincinnati"; WKRP IN CINCINNATI), each is well and truly delineated throughout, behaving and speaking exactly as he does on the tube. That's talent. (So is the appearance of J.R. Dunster's art.)

Other shows heard from [in her other zines in the series]: M*A*S*H*, TIME VOYAGERS, THE GREATEST AMERICAN HERO.

From "Upcoming Special" section at the end of the zine:

I thought I heard someone say, "One more time!" So, against my better judgment, "Independent Fool" will appear sometime in July. I'm only doing two stories this time, so perhaps I can finish close to the Fourth of July (or the 14th — Bastille Day). The title of this 'zine is derived partly from the holiday, but also because these stories are not as closely connected with the series which inspired them. You'll see what I mean.

"Postcards from the South of France" or, The Further Adventures of Daniel and Abigail. Abigail yields to temptation and visits the ever-charming Daniel Chalmers at his retirement home in the south of France. Most tourists expect to lose a little money to the natives, but highway robbery is always hard to take, and Abigail refuses to sit still for it. What happens in the ensuing days tells us a great deal about where Laura got her curiosity, her sense of right (and wrong), and her adventuresome streak. (Based on characters introduced in the REMINGTON STEELE episodes "Thou Shalt Not Steele" and "Sting of Steele").

"The Shadow of a Great Name." Thirty-five years before Michael Long is rescued on a starry night in Nevada, Devon Miles joins the eccentric American "boffin" he had worked with during the war. It is the beginning of what will someday become Knight Industries, but just as political empires often suffer growing pangs, so do industrial ones. Devon and Wilton Knight battle to save their fledgling company from its enemies — inside and out. (A prequel [of sorts] to KNIGHT RIDER)

As of this writing, I have no idea about page count (I just write 'em until they're done), and therefore, cost. Interested parties should send a SASE to: Essay One Productions [address redacted].. Anything beyond this will require real arm-twisting (but is not completely out of the question).