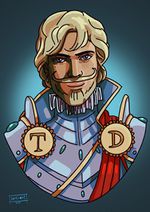 Tary is a fictional character played by Sam Riegel on a popular D&D web series Critical Role. He appeared in Campaign 1, when Sam Riegel took a break from playing Scanlan Shorthalt. Taryon travels everywhere with an automaton named Doty which he has built with the purpose of documenting his adventures. "Doty, take this down" is a popular running gag within the campaign[1].

Reception of the character has been mixed in fandom. Some fans hated him and wanted Scanlan back[2], while others considered taryon to be a better character[3].

Tary brought a very unique energy to Vox Machina that I just enjoyed immensely, and I’m convinced that his arrival had just as much of an impact on the group as Scanlan’s departure did. I love that he came in as this caricature of what Vox Machina had actually become by that point. Heroic, a little full of themselves, always up for adventures but at times oddly unprepared for them. And then, with time, Tary slowly revealed this other side; both in himself and in the other members of Vox Machina: that there are different ways of being a hero. That being a kind person with distinct values and deep relationships is more important than defeating the next monster of the week. And then - of course - Tary has a special place in my heart for being the first canonically gay PC in CR. [4]

When Tary came out as gay, some fans took offense in the way the cast handled that scene, prompting Matt Mercer to address the issue. Tumblr user katethegreatuniverse summarized the events:

After episode 94 aired several people took to twitter to express their displeasure with the way that Tary’s backstory and coming out and general character type was handled. There were also people who said that the cast should talk to the community when they want to talk about issues like this because the cast doesn’t have the right perspective. Matt addressed the issue on his twitter (source) and several more people felt the way he responded wasn’t acknowledging the issue. Then yesterday on his date with the chat he decided to further clarify his point. He started by apologizing to anyone who felt uncomfortable by Tary’s storyline. Matt then started to talk about the experiences he’s had with homophobia and that the cast has had. He explained that there is a spectrum of genders and sexualities in Exandria but homophobia and ignorance still exists and that they weren’t making fun of Tary’s awakening. Matt went on to speak about an Uncle of his named Ted who had introduced him to musical theatre and the arts and was married with a kid. And who one day realized he was gay and watching the backlash from his family because of that and how Matt knew that that wasn’t right. And Matt went on to talk about how he lost his uncle to HIV and AIDS. It was about this point Matt started to become choked up and started to cry. He started to talk about how glad he is that we now by comparison live in a world that things are more open and accepting and communities exist to help those who shouldn’t have to suffer in silence. He wanted to let everyone know that it may not be the story you wanted to see but it’s the story that others may need to hear. And he sorry he couldn’t please everybody and he tries anyway. [5]

Taryon has the additional baggage of his abusive father reacting extremely negatively upon discovering his son was having a relationship with another man, to the point where Taryon assumed Lawrence was killed. IMO after reading back the transcripts, Taryon *knew* he was gay, he knew he wasn’t attracted to women (and it was becoming obvious to the rest of Vox Machina as well), but he in his quest to impress his father, he felt the need to see if maybe that wasn’t really the case by having sex with a woman.[6]