Tales from the Slipstream

You may be looking for Slipstream.

Tales from the Slipstream is a gen Andromeda anthology. 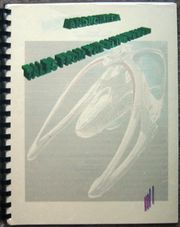 Tales from the Slipstream 1 was published in 2001 and contains 61 pages. It has interior artwork by Ben Brackett and Debbie Casselbury. The cover is by S.C.

Note: the first edition of this zine did not include the two stories by P.E. Savage.

Artwork: The cover has a hint of color. The picture is so faint it's hard to see. All of the interior art is black and white. The interior has a nice caricature of the crew in the beginning. There are six small scanned photos from the show. Some are visible; others are way too dark. There's a cartoon drawing in the back that is okay, but it's the same picture of the Andromeda that appears on the cover, the inside cover and twice more in the zine. This zine has both good and bad points. The cover is paper with a clear sheet of plastic over it. It has single columns with wide borders all around. The paper is just thin enough to see the words and pictures through on the other side. There are 19 short stories; a drinking game and an episode guide for the first season. The layout is very readable, though there's a TON of empty space. Some of the stories are only a paragraph long, yet have the entire page to themselves. The margins look to be about 1" on all sides with about a 2" header at the top. Plus, there's a nice crossover story by Laura Michaels with Stargate SG1. It's cute and funny. The stories are, for the most part, interesting and enjoyable. The grammar was not checked very well at all and there are typos. They do distract the reader from some of the stories. The episode guide is nice to have. The game sounds fun. Some of the authors have stories in many fandoms on the web and are good writers. Others aren't such strong writers, but their stories were imaginative. Altogether, this zine is okay. It does show promise for future issues. [1]

Tales from the Slipstream 2 was published in 2003 and contains 86 pages.

I finally got my trib copy of this one, too! This zine is put out by Chaos Unlimited... It's 8x11, double column, 86 pages at about 500 words per page. It has a subtle color cover of the Andromeda. There's no interior art in this issue. There are four short stories and one novella. This zine is an All-rating zine. Even though I got this one today, I can go ahead and review because the stories I didn't write are short. Angels Would Fall, by Margaret Brown, is a lyrical, poetic look into Dylan's feelings for Rommie. It's that moment of realization, of doubt, of fear. Well done! Atemisia, by Margaret Brown was a real surprise. Kind of a continuation, though not strictly, of Angels Would Fall, it's beautiful and sexy... very sexy. :-) Margaret, the poem you quote is beautiful and deeply sexual. Great job! Avatar, by Anna McLain (me). Well I won't review my own stories because of course I like them! I'll just give the teaser. A lonely Harper decides to make a "friend" but things don't turn out the way he wants. Some angst. Some fighting. I Learned That From You, by me. This is a short Dylan/Rommie piece with a lot of angst. This Time Needs My Help, but Laheara, is a glimpse into gold Trance's mind, her plans, her insecurities. An nice story. Now, I think there was a goof in the Table of Contents, because there's another header for a short story called The New Trance with glimpses into all of the crew's fears, hopes and impressions of the new Trance. A good character introspection! But, it doesn't say who wrote it. I suspect it was Laheara, because it reads similarly to This Time Needs My Help. Both end with the phrase, The End for now. But, I don't know for certain if Laheara wrote them both. Those are my impressions! Remember, if you read this zine, that all stories are eligible for the FanQ award next year. [2]

Tales from the Slipstream 3

Tales from the Slipstream 4 was published in May 2004 and contains 151 pages. The cover is by Anna McLain.