You may be looking for Tales of Sherwood Forest, a letterzine. 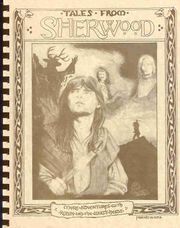 Tales from Sherwood is a gen 139-page Robin of Sherwood anthology edited by Paulie & Tami Marie. The cover art is by Paulie. The fiction centers around the HTV/Showtime series and includes an interview with Robert Addie, convention photos, poetry and art.