Tabletop RPGs evolved from tabletop miniature wargames; Dungeons and Dragons, first published in 1974, was the one of the first widely-known tabletop RPGs. The genre continued to evolve and change since that time, expanding to different settings such as sci-fi and horror. Today, many games and systems are on the market, and software exists to enable people to play games virtually. Indie titles have also taken off during the late 2010s, some of which bend and break the rules of the medium in interesting ways (such as using a card deck instead of dice, or being created for only one player).

Tabletop games generally include a game master ("GM") who works as both a narrator and referee to interpret the rules, and players who take the part of characters ("PCs") with various skills and abilities, who go on an adventure or accomplish some task together. Most games involve some level of character creation, and an introduced element of randomness.

Tabletop RPGs are famous for using various kinds of dice. With the rise in popularity of actual play fandoms which has led people to discover tabletop RPGs, they are frequently featured on fan merch like pins and t-shirts. Beyond the variety in shape, a wide array of colors, textures, and materials are used to make dice (with price points to match). Some players like to put together themed "dice sets" that they feel represents a specific character 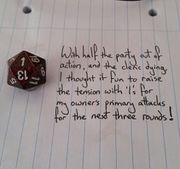 Because the dice introduce an element of randomness that can counteract a well-planned strategy or completely turn the tide of play, players sometimes develop a level of superstition around the rolls they get.

During the 1980s, Dungeons & Dragons specifically was at the centre of a moral panic in the US, due to the belief among some religious groups that the game was associated with satanic rituals and witchcraft.