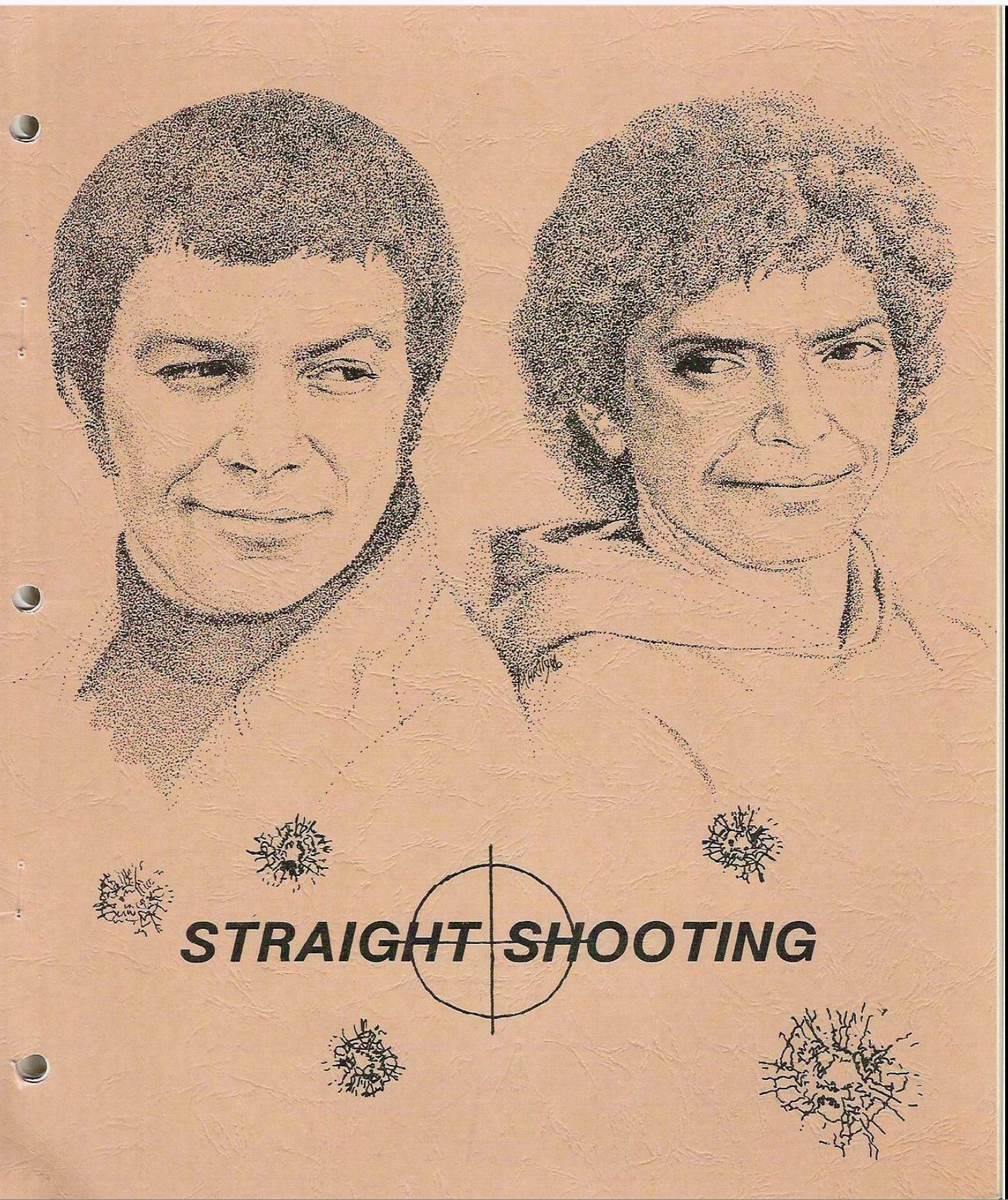 Straight Shooting is a het and gen 136-page Professionals anthology.

The Connection to "Mixed Doubles"

It was a LoC by well-known fan named [S-A H] that, among some other things, was one of the events that caused the editors of Mixed Doubles decide to cease publishing.

"A Professionals zine to premiere in the Fall of '86. X-rated, yet NO same-sex or death stories please! (Get the title? Nudge, nudge, wink, wink, say no more!) We will accept material based on other roles the actors have played. Poetry, Fantasy pieces, art work are needed." [1]

Reactions and Reviews in the Letterzine "Mixed Doubles"

I have a burning question I'd like to ask; one that was 'inspired' by my recent reading of the new Pro's zine, STRAIGHT SHOOTING. This question is directed towards all your writers of 'Mary Sue' stories out there: Why do so many of you feel you have to portray B&D as practically hating each other?! I can see where you'd write yourself into the story as a 'Mary Sue' character because you want to play out your sexual fantasies with one (or both} of the guys; personally, I like to keep my own sexual fantasies involving my favorite actors private, but to each her own...but WHY do you always have to write the guys as being so antagonistic towards each other? Is it that you really only care for one of the guys (presumably, the one who's involved with the Mary Sue heroine), and you hate his partner so much that you feel you have to write the guys as hating each other? If that's the case - if you really think they hate each other so much - what attracted you to the series in the first place? Even on the series, when one of them was involved with some woman or other, they never acted as if they couldn't stand the sight of the other! OR - do you write B&D that way because you're so appalled by the very thought of B/D that you're afraid to have them show any caring or friendship or affection towards each other for fear it'll be 'misconstrued'? ... If anyone was to ask me why I write B/D, I wouldn't need to hesitate in explaining: it's because I love them so much together - WITH EACH OTHER - I couldn't ever bear to write anyone else coming between them - not even me, as a 'Mary Sue'!... good writers know how to write expressions of 'brotherly' Iove and caring and friendship, without ever 'going over the top', and without having to resort to including any 'Mary Sue' characters in order to prove how 'macho' the guys really are!" [2]

Like beauty, truth is sometimes in the eye of the beholder. As the writer of one of the stories in STRAIGHT SHOOTING which [S-A H] hated so much, I would like to be allowed to present an alternate viewpoint. First, I must state I in no way wish or expect to change [her] opinion about the story, and I agree with her that [V A] story is easily Best of Zine. However, I knew when I wrote the story that [S-A] was going to hate it. I never expected '/' - only readers would want to read it nor do I feel Doyle fans would find it of much interest. But I do urge those of you who normally would read non-'/' Bodie-focused fan fiction to read it and judge for yourselves." [3]

... How can I defend myself against a charge of Mary Sue? It's sure nothing I could say would change [S-A's] opinion, but what about the rest of you? I swear the lead female character is not me, but I can't prove it, unless the word of those who know me and helped me on the edits (one straight fan, one '/' only, and one half-and-half, along with the editors who did not know me before I sent then the story) will do. The character simply isn't perfect in any way, has no extra powers, end saves no one. Bodie is not her reward; he is her healer. And she is not me. Please judge for yourselves. Don't we have enough labels, as it is? While I read and write both '/' and straight, I do appreciate that people want to avoid what they don't like, but how far should we go? What about those who hate death stories, hurt/comfort, get-'ems, Bodie-only or Doyle-only stories, sex without plot stories (I hate those, and I don't care if they're '/' or straight), non-relationship stories, etc? And who is to judge each story to determine into which category they fit?