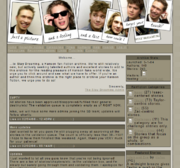 Stay Dreaming and The Tightrope were the two names of a Hanson fanfic archive that was online for periods of time from 2004 to 2011. It changed names in December 2007, although the associated LiveJournal community and forum used both names.

All content posted to the site was reviewed for quality and neither slash nor incest were allowed. Authors with a history of quality stories could be automatically approved without review. In the first incarnation of The Tightrope, stories that were not up to quality standards were culled and moved to a section called The Emerald Lake.

Stories were divided into five categories: Isaac Centric, Taylor Centric, Zac Centric, Group/Combination/Other and Challenges. When The Tightrope returned in 2009, a new category for Old stories was added.

The archive hosted a variety of challenges, including Fictionally Yours, HanWriMo, Written In This Song and more.